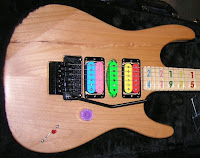 Paradise Guitars USA has unveiled its new Jason Becker signature guitar. This guitar was designed with Jason’s blessing, based on his famous custom Peavey guitar, and with a headstock of Jason’s own design.

At different times Jason was in discussions to have a signature model made by Peavey and Jackson, but those plans never panned out. No specs are available yet for the Paradise Guitars version.
There are also photos on the Myspace page of Paradise endorser Davin Kline Jr.

On the Jemsite.com forum, Paradise’s Tom G said, “There will only be a limited edition of this guitar. Paradise Guitars have been taking pre orders, quite a few are sold to some untold names. You can email Paradise Guitars if your interested in a preorder to make sure you get one. I made sure i got one! Jason is flipping, and very excited! The guitar will come with a few suprises from Jason,for the first forty buyers.”

To get your hands on one of these bad boys, contact Paradise Guitars USA through their website here. 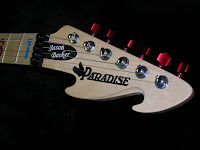 In addition to being a solo artist, Jason was guitarist in Cacophony with Marty Friedman, and replaced Steve Vai in David Lee Roth’s band. His performing career was cut short when he was diagnosed with Amyotrophic Lateral Sclerosis, but Jason still composes music. Shrapnel Records will release The Best Of Jason Becker on November 4, including three new songs written by Jason which feature Marty Friedman, Greg Howe, Joe Satriani, Michael Lee Firkins, Steve Vai and Steve Hunter.
Photos by Paradise Guitars USA.