The final entry in Sparkly Guitar Week is the Fender J Mascis signature Jazzmaster. Mascis rose to prominence as the leader of Dinosaur Jr, and can always be relied upon for fuzzed out freakage.
Fun fact: This one time, I was wearing my Dinosaur Jr shirt, which has a picture of Mascis’s bulldog on it. I was strolling along Acland St in St Kilda and I saw this dude walking towards me, staring at my shirt. I thought “That dude looks like J Mascis.” Then I got to work and read the paper. In the entertainment section was a photo of the same dude from Acland St. It was J Mascis, in town to do a solo gig. A-doy.
Anyway, here’s what the Fender website has to say about the J Mascis Jazzmaster.

Mascis took the instrument to a new place with his feedback-drenched, distortion-laden band, Dinosaur Jr. This new signature model pays affectionately ear-splitting homage to Mascis, giving the instrument a modern makeover for fans who’ve been clamoring for such a model for years.

With its stunning and unusual Purple Sparkle polyester finish, matching headcap and gold anodized pickguard, the guitar features mods requested by Mascis himself—including an Adjusto-Matic bridge, reinforced tremolo arm housing and a satin-finished neck. The Dinosaur roar comes from dual vintage reissue pickups and the barrage of controls the Jazzmaster has always been known for—a three-position toggle switch with volume and tone knobs and, for this model, a two-position slide switch with volume and tone controls configured as a “lead tone circuit” (up) and a “rhythm tone circuit” (down).

Available beginning in July 2007, the J Mascis Jazzmaster is literally a sparkling new addition to the Fender lineup, in celebration of the adventurous and continuing sonic contributions of the man who has been the model’s constant champion for nearly 25 years now.

HERE’S one on eBay or you can see more HERE. Or you can get one HERE at Music123. 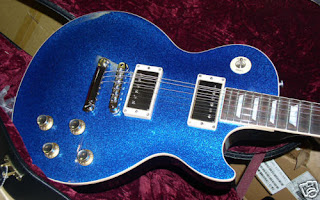 I have a love/hate relationship with Les Pauls. They sound cool, they look cool, but sometimes the neck pitch throws me off a bit and my left wrist gets a little sore. Having said that, I’ve got to meet a lot of great Les Pauls over the years and the wrist thing is certainly something I’ll work through if I ever get totally rich and buy a stable of Les Pauls. And most of them will probably be sparkly.

There are a few Custom Shop Blue Sparkles out there. The one pictured here is being sold on eBay by Vintage Vault.
I’ve been browsing on eBay just now, daydreaming about sparkly Les Pauls. There’s a gorgeous multi-colour sparkle Les Paul here, a blue/silver sparkle here, and a sparkle cherryburst here that has to be seen to be believed.
Epiphone also gets in on the sparkle action with this limited edition purple sparkle, and this gold sparkle.
Or if you’re not into the Gibson thang, there’s a Burny silver sparkle with three pickups here.
CLICK HERE to see more guitars at Vintage Vault’s eBay store, or click here to search for sparkly Les Pauls in general. 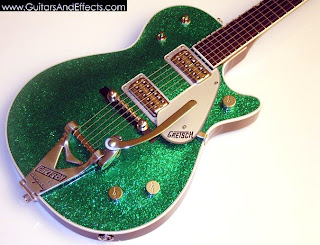 So far all the sparkly guitars of Sparkly Guitar Week have been single examples, but Gretsch has championed the cause of the sparkly guitar so thoroughly that I’m just gonna cite them generally. Pictured is a Sparkle Jet (photo originally from guitarsandeffects.com). This model is still available today, although they’re certainly not the most common Gretsch on the racks. CLICK HERE to see the page for this model and colour (somewhat unsubtly titled ‘green sparkle’ on the official Gretsch website.

Another notable and highly visible Gretsch is the Silver Jet model used by KT Tunstall. KT’s Silver Jet has a different bridge than the Bigsby unit that comes standard on the current Gretsch model, (which is based on the early 60s version of the Silver Jet) but the vibe is still very much there, as is the sparkle.

CLICK HERE to see the page for the Silver Jet on the Gretsch website.
And here are a bunch of cool sparkly Gretsches available on Musician’s Friend. Dig that crazy sparkly baritone! 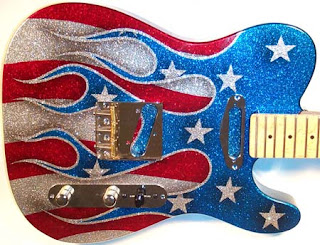 Artist Tony DeLacugo has some amazing work on his website. check out his amazing sparkle paint jobs here, and look at available guitars here.

On his website, DeLacugo says “This all started when an old friend sent me his ’69 Tele to have painted. Once I had the genuine body in my hands I decided to build patterns from it and and creat a new line. Most of my new T bodies are made from alder and some have been mildly chambered. Occasionally I make one out of Mahogany. The neck pocket is a standard 2-3/16 wide at the base has been pre-fit with a ’69 tele neck, so Tele replacement type necks with a standard 2-3/16 heel should work fine. All routes and holes are complete except pickguard and control plate.”

Bookmark this page and CLICK HERE from time to time to see when he is selling painted bodies. Tony tells me he’ll be selling more on eBay in a day or two. 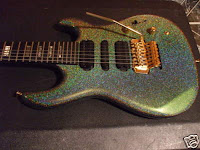 Speaking of sparkly guitars, check out this Carvin DC747 7-string on eBay. At the time of writing there are 13 hours to go on the auction, with no bids. Specs include: Alder Body, neck thru, ebony fretboard 24 frets, gold hardware, abalone block inlays, stock pickups, 6100 fretwire, locking tuners. I’ve never seen a Carvin with this finish before. WANT! If anyone who reads this site happens to buy it, let us all know what it’s like! 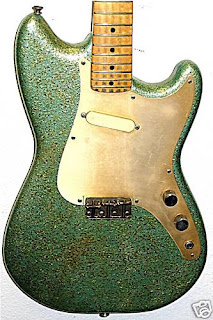 This 1959 Fender Musicmaster was designed as a student guitar, and what could be cooler to a 50s teenager than rocking out on a sparkly Fender?

This particular guitar is for sale on eBay by Neals Vintage Guitars. Click here to see it.

This is a 1959 Fender Musicmaster Guitar in RARE Sparkle Finish. This guitar is all original. All solder joints are stock. The neck date is Jan of 1959 and the pots date 1958. Everything is correct. Has great neck, nice and straight, low action, frets still in very good shape with just minor wear. Comes with the original tan Fender Case. 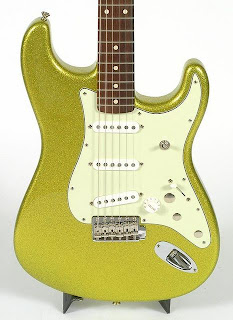 Today’s sparkly guitar is the Fender Dick Dale Stratocaster. Look at that damn thing. The heavy strings and gutsy single coil pickups say “I’m gonna kick your ass in the parking lot,” but the sparkly gold finish says “Then I’m going to run my flick-comb through my hair and drive off in a duck egg blue Caddy.” 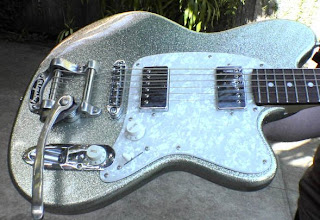 Welcome to the first I Heart Guitar Theme Week. In the future these will occur in the first week of the month any month when I can think of a theme, but I’m feeling all inspired post-NAMM so I’m going to start now, while I’ve got my Google on.

First up is my very own Ibanez Talman TC825, named Candy. You can see the full specs in this Ibanez catalog from 1997. This sparkly beauty was a Christmas present from Mrs I Heart Guitar in 2005. After I almost lost my mind over its magnificence at Music Swop Shop in the Melbourne suburb of Carlton, she asked me a few questions about it, then told me she’d like to buy it for herself so I could teach her to play guitar. But it was all a ruse! I was carrying the guitar out of the store for her when she said “You’d better let me carry that …I can’t make you carry your own Christmas present.” This is just one of the many many reasons I’m totally in love.

This particular Talman was produced in Japan at the same Fujigen factory as Jems, high-end RGs, Joe Satriani JS models and other cool stuff like that. It has two Ibanez Super 58 pickups, 5-way switching (there are single coil and parallel options in addition to the standard humbucker selections) and, coolest of all, a Bigsby tailpiece. The body is alder and the sparkles are magnificent. This guitar is great for edgy overdrive and retro tones, and you can hear it on the song ‘Mistral’ on my myspace.

The Talman name lives on in Ibanez’s catalog in the form of various acoustic guitars, but this particular design, sadly, does not. If you can find a used one in good condition, they’re great little players with lots of character.

Check back tomorrow for another sparkly guitar!