Aljon over at Tonefreq.info is running a week of pedalboardy goodness, and today he’s posted an entry from me about my (continually evolving) pedalboard. Here’s the photo, but CLICK HERE for the post where I explain my pedalboard in greater detail. 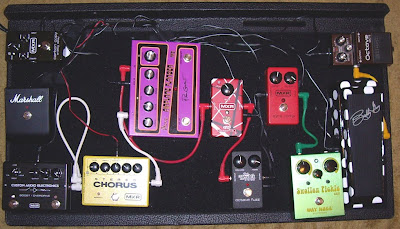 When Gibson debuted the Robot Guitar in December 2007, it was quite the revelation. Sure, Steinberger’s Trans-Trem allowed you to shift the guitar’s whole tuning up or down by a semitone. The Stringmaster Automatic Tuner tuned your guitar for you, provided you placed it on each tuning key one at a time. But the closest anyone got to the functionality of the Robot Guitar was the Performer system by TransPerformance, and the cost of having it installed in your guitar you could pretty much buy two Robot Guitars in their SG, Flying V or Explorer guises. The Robot Guitar wasn’t even as expensive as many guitars in the Gibson catalog. But you wouldn’t expect the company that popularised the humbucker and invented the Flying V to sit back and rest on its laurels. Nope, Gibson went back to the lab and created the Dark Fire.

JUMP IN THE FIRE

To call the Dark Fire an update of the Robot Guitar is like saying that when Luke Skywalker learned to use the force he picked up a few cool tricks. One way to approach the Dark Fire is to imagine that the popular, stripped down Les Paul BFG model ran into Kristanna Loken’s T-X character in Terminator 3: Rise of the Machines, got it on, and 9 months later had a baby. The Dark Fire shares the BFG’s pickup layout of a P-90 pickup in the neck position and a humbucker at the bridge – here we have a P-90h for the former and a Burstbucker 3 for the latter – and it has the T-X’s ability to morph while remaining a seductively attractive yet altogether deadly killing machine. 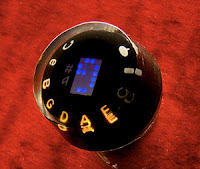 Common to the Robot Guitar and the Dark Fire are the control layout (twin volumes and twin tones, with the bridge pickup’s tone control replaced by the Master Control Knob or MCK, the steering wheel of the whole shebang), but the MCK has been redesigned to give you more information (including a cool mode that shows you which pickup selections are active), and the brain itself is a little smarter and faster. Tuning seems to happen in about a third of the time of the Robot Guitar, making it just that little more likely that with some careful control manipulation and an opportune moment, you just might be able to change tunings between sections a song.

Changes compared to the Robot Guitar include an ergonomic neck shape with asymmetrical carving (which reminds me a little of perhaps a wider version of the Ernie Ball Music Man Axis, formerly the Edward Van Halen model), and a redesigned tune-o-matic piezo bridge with locking studs. Not only does this assist with sustain by securing the bridge more firmly to the surface of the guitar, it also helps with the tuning accuracy – tremendously important when you buy a guitar largely based on its ability to change between a few dozen tunings. By the way, Gibson points out that players who bought the original Robot will be offered an opportunity to upgrade their Robot’s self-tuning technology to the new and improved self-tuning technology found on the Dark Fire, with an upgrade kit to be made available at a price significantly lower than its standard retail price. 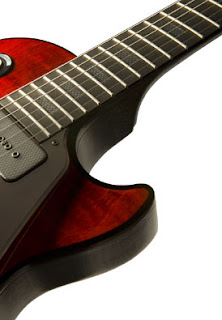 The frets are shaped with a PLEK system, a computer-controlled device which scans and dresses the frets under actual playing conditions, strung and tuned to pitch. (Other companies with PLEK systems include G&L, Duesenberg, Lakland, Warwick, Martin & Co, Suhr, and Heritage Guitar Inc). Now, as a connoisseur of fine fretwork my standards can be pretty strict, possibly bordering on the obsessive, and the fret job on the Dark Fire is beyond perfect for comfort, playability and buzzlessness. Yeah, I just invented a word. The Dark Fire inspires you to be inventive, y’see. There’s also a new frictionless faux bone nut, which is crucial for ensuring that the strings don’t get bound up at the nut and slip at an inopportune moment, sending your tuning to hell and requiring you to try to retune mid-song. The motorised Powerhead tuners are of the locking variety, further ensuring tuning accuracy. They’re also upgraded compared to those on the Robot Guitar, helping to speed up tuning changes.

So what else does the Dark Fire offer that the Robot Guitar doesn’t? Well, my only real concern with the Robot Guitar was that you were limited to three pickup combinations: neck humbucker, middle humbucker, or both. But by using what Gibson calls Chameleon Tone Technology the Robot Guitar offers over 20 separate pickup coil combinations via six low-noize relay switches. These selections, accessed via the MCK, are Gibson (straight Les Paul sound), Texas Blues (neck and bridge single coils), Funky (out of phase quack and pluck), Twang (think clean single coils), Acoustic (emulated acoustic guitar), L5 (vintage jazz tone with softer treble and thicker low mids), Solid Rock and Metal. These pickup combinations are fed through optimized traditional volume and tone controls and then through a studio grade 4-band parametric equalizer/preamplifier for further tone shaping. On top of that you can blend an actual acoustic sound, achieved via the piezo pickups in the bridge, and splittable to a different amp to the straight sound through the Robot Interface Pack (RIP). The blending is achieved by twisting a potentiometer which doubles as the tip of the pickup selector switch. Genius. Using this pot you can go from 100% acoustic sound to 100% electric sound, or anywhere in between. Oh, did I mention that when using the RIP you can send each string to a separate audio channel via a hex output, reminiscent of the revolutionary but overlooked Gibson HD.6X-PRO guitar system? No? Well I should have cos it’s kind of important, as is the fact that Dark Fire is bundled with Ableton Live recording software and Guitar Rig 3 amp emulation software.

There are lots of other great features – strap locks, Neutrik connector, cool carbon design touches echoed on the pickups, pickguard and inlays. Put it all together and you have a monster. A dark, firey monster. 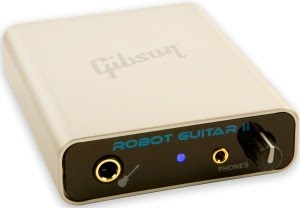 The Chameleon and RIP features are so damn cool that you can spend a few hours playing around with them before you even think of trying out all the tunings. The Dark Fire picks up where the Robot Guitar’s 7 available tunings left off, then laughs derisively at the Robot Guitar as it ups the ante to a whopping 18 tunings in total across three banks (blue, green and red), with space for your own custom tunings. One of my favourite metal tunings, CGCGCE, isn’t there so it’s easy enough to dial in and save. Speaking of metal, the red tuning bank is where doom merchants are most likely to reside, as it is home to brutal low tunings such as B and C. Grrr.

The range of sound is also quite astounding. On its own the Dark Fire sounds a little, well, dark and moody, thanks in large part to the chambered mahogany body. Think Jerry Cantrell’s tone on Alice In Chains’ ‘Would?’ The Texas Blues mode sounds just as you would think and hope – tune down to Eb for authenticity. Funky sounds great with my old optical compressor pedal, and is also a surprisingly sprightly blues tone. Twang is great for clean baritone tunings as well as ringing double stops and oblique bends. Acoustic can be blended with the actual acoustic sound for some serious spacious jangle. L5 is great for jazz as intended, but is also a super lead tone that will get you somewhere in the vicinity of James Hetfield’s solo tone from ‘Nothing Else Matters’ when you pile on the gain. Solid Rock is killer with some mild distortion over palm-muted power chords, and extra super killer when you add a flanger pedal. Finally Metal is huge, powerful and demonic, reminding me of a cross between the output of aggressive active pickups and the attack and warmth of top-shelf passives.

OUT OF THE DARKNESS AND INTO THE LIGHT

So what we have here is not only a guitar that tunes itself. Factor in each tuning and you have 18 guitars that tune themselves. Throw in the 8 Chameleon modes and you have 144 guitars that tune themselves. Add pickup selections for each mode and that’s, what, 432 sounds? My math sucks. Then add the acoustic sound to any of those modes and you have… more sound options than you can possibly get through in any given set. Yet the MCK is so intuitive that it never quite seems as daunting as that. Whether the Dark Fire is for you comes down to this simple question: Do you think you can handle this much creativity on tap, or do you prefer to be reigned in by parameters such as only having one tuning, and three pickup settings?

If you’re here in Australia, support your local guitar shop! There have been a lot of killer Gibson deals in stores lately!

Here’s a little bonus. Unfortunately I didn’t have time to shoot a video demo of the Dark Fire while I had it for review, but who better to tell you about it than Aljon Go from Gibson and Tonefreq?

This review is also in the August 2009 edition of Mixdown Magazine.