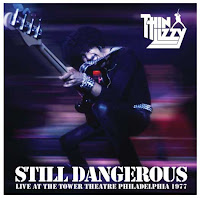 Get ready for another serve of classic twin-guitar rock awesomeness, as VH-1 Classics Records releases a 1977 live recording of Thin Lizzy.

Entitled ‘Still Dangerous,’ the album is out on March 3. It was recorded on the band’s sold-out 1977 ‘Bad Reputation tour, and captures the classic quartet of Lynott, Downey, Gorham and Robertson the celebrated Tower Theatre in Philadelphia.

Unlike the classic Live And Dangerous album, which the band admits was heavily overdubbed (with the exception of ‘Southbound,’ which was recorded at a soundcheck, only the drums and the audience on that album were from the actual concerts), Still Dangerous is 100% pure, unadulterated, live Thin Lizzy.

‘Still Dangerous’ features three songs that never made the ‘Live & Dangerous’ release, and all of these performances are previously unreleased. The album was mixed by the legendary Glyn Johns (Led Zeppelin, Joe Satriani), with contributions from Scott Gorham and Brian Downey.

VH1’s ‘The Leak’ and AOL Music will be streaming the entire album surrounding the week of release, and ‘Still Dangerous’ will be available digitally, on CD & limited edition vinyl.