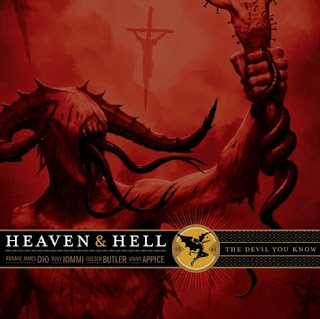 Whoa. Check out that cover. I haven’t seen anything that evil since …well, since the last time I ate cheese before bedtime then had nightmares. So this is the new Heaven & Hell album (otherwise known as Black Sabbath’s Ronnie James Dio line-up with a different name).

After finishing several heralded world tours as HEAVEN & HELL last summer, Ronnie James Dio, Tony Iommi, Geezer Butler, and Vinny Appice were tighter than ever before, both musically and personally.

Agreeing that it would be a shame to stop making music together at tour’s end, the quartet began writing, first in England at Iommi’s home studio and later in Los Angeles at Dio’s studio. “The band had gotten too good to just walk away,” Dio says. “We wanted to show people that we were still capable of giving them new music that measured up to what we’d done in the past.”

With that goal in mind, the band once again converged on Rockfield Studios in Wales last winter, the same place they used 17 years earlier to record their last album, “Dehumanizer”. The result is the long-awaited new album, “The Devil You Know”, featuring 10 soon-to-be-classic tracks from the Dio-fronted version of BLACK SABBATH. The highly anticipated set arrives on April 28 from Rhino for a suggested list price of $18.98 (physical) and $9.99 (digital).

It took less than three weeks to finish the album, with most of the songs only needing a couple of takes. “It was good to play them live in the studio. It keeps you on edge,” Iommi says. “I mean, somewhere along the line we were gonna have to play them live; might as well start in the studio.” Butler adds: “We’ve learned from the past that you can kill a song doing it over and over. The first SABBATH albums were done in two or three days. Technically they weren’t great, but vibe-wise they were great. If you capture that feeling, that’s all you need.”

“Bible Black”, the epic first single, begins with Iommi on acoustic guitar behind Dio’s plaintive wail before the rhythm shifts to a menacing stomp for the rest of this dark tale about a book of sinister scriptures. One of the first songs written for the album, Dio says it established a tone for the rest of the album. “When you start off with a blockbuster like that, it makes the rest of the album so much easier because it gives you a benchmark to measure the other songs against.”

Iommi proves he hasn’t lost the ability to inspire six-string envy, unleashing riffs like a pack of rabid hellhounds on “Atom And Evil”, “Fear”, “Neverwhere”, and “Eating The Cannibals”, a tune about doing more than biting the hand that feeds. Butler and Appice slow the pace while ramping up the intensity on “Follow The Tears” and “Double The Pain” and “Breaking Into Heaven”, the latter diverging from its glacial procession for Dio’s majestic chorus about fallen angels planning an attack on paradise.

“The Devil You Know” track listing:

CLICK HERE to pre-order Heaven & Hell’s ‘The Devil You Know’ from Amazon.com. 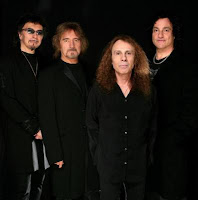 Can you feel the evil in the air? Heaven And Hell (that’s the new name for Ronnie James Dio-era Black Sabbath, if you’ve been living in a crypt for the last few years) are almost finished recording their new album of original material.

Finally we get to hear a whole album’s worth of new music from the mighty Tony Iommi and Geezer Butler. The three new tracks on the recent best-of were pretty bitchen and certainly above the usual “We knocked these songs out in a weekend to fulfil contractual obligations” fare usually barfed up as best-of bonuses, so I have a lot of hope that the new stuff will be worthy of taking a place on the throne of evil next to their other albums, ‘Heaven And Hell,’ ‘The Mob Rules’ and ‘Dehumanizer.’

According to Blabbermouth, drummer Vinnie Appice (who I saw strolling around Melbourne when Heaven And Hell played here last year, but I was too chicken to throw the devil horns to) has issued the following update: “Well, the new Heaven And Hell album is going very well with almost three fourths of the songs recorded. It sounds amazing and it’s very heavy. The untitled CD will be released sometime in March-April 2009 (via Rhino Records).”

Heaven And Hell will tour in early 2009 in support of the new album. So far the following shows have been announced:

Oh and I took that photo of Iommi with my camera phone. Sorry…