I Heart Guitar has a high level of Google traffic as well as a strong regular readership who like to interact via each story’s comments section. The site currently gets between 50,000 and 60,000 pageviews per month. Higher traffic can be expected in January and July (NAMM trade shows) and March (Musikmesse trade show), when regular visitors hit the site more often for news, and Google traffic increases as casual readers search out the latest news. Scroll down to see who’s mentioned I Heart Guitar.

CLICK HERE for the most recent traffic statistics courtesy of SiteMeter.

CLICK HERE to see the location of the last 100 visitors to the site.

Email me at iheartguitarblog@gmail.com for more information.

While most of the posts are press releases for new gear, Hodgson is as current on it as anyone out there, even beating a few more established “corporate” guitar sites to the punch on many of them. He’s also secured some pretty big names for interviews, including recent chats with Dinosaur Jr.’s J Mascis (June 29) and Chickenfoot’s Joe Satriani (June 16).

Jemsite Blog
We Heart Hodgson (July 2009) – Some great news came my way the other day. Peter Hodgson, the hip guitarist who writes the I Heart Guitar blog, is being featured on DiMarzio Inc., maker of some of the best guitar pickups in the world. They’re using clips of his guitar playing on their website to showcase their John Petrucci (Dream Theater) signature pickups, the Crunch Lab 7 and LiquFire 7.

Gear-Vault
Top Guitars Blogs – iheartguitar is making waves not only online, but in print. This blog is pure professionalism. His content is very well written and the writer (Peter) flows with knowledge, and his website’s name [iheartguitar] is the perfect name for Peter, because he truly does love guitars. Read his blog and you’ll quickly see how passionate he really is. Keep up the good work Peter! 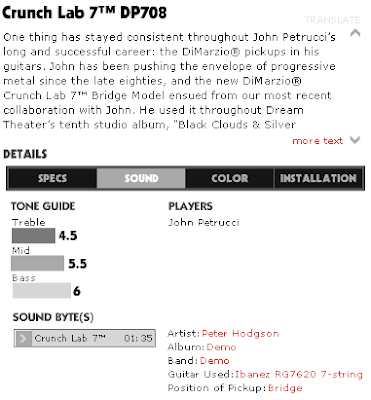