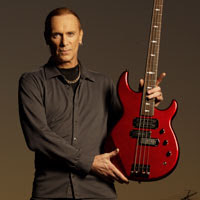 Bass god Billy Sheehan, he of the flowing blond mane, insane tapping licks and growly tone from albums by David Lee Roth, Talas, Mr Big, Steve Vai, Devil’s Slingshot, Niacin and about a billion more, is coming to Australia for a few clinics on behalf of Yamaha and Allans Music.
Billy has a new album coming out soon with some very special guests (including Paul Gilbert), and Devil’s Slingshot recently released their debut album, Clinophobia. The progressive metal band consists of Billy, guitarist Tony MacAlpine and Aussie drummer Virgil Donati, and for a time these three, with the addition of Dave Weiner, were Steve Vai’s backing band. You can see them in action on Vai’s Live At The Astoria DVD.
Billy has a rad new Yamaha bass to pimp, as you can see from the pic. This one reminds me of the bright pink Yamaha he used to play in the David Lee Roth days.
Dates are:
Melbourne: October 14, Allans Music, 152 Bourke St, City
Brisbane: October 16, Allans Music, 90-112 Queen Street Mall, City
Sydney: October 17, Allans Music, 228 Pitt Street, City
Tickets are $20 and available from Allans stores and online.