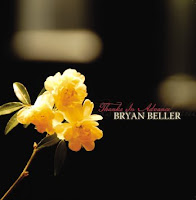 Bassist Bryan Beller’s second album goes a little deeper than its predecessor, ‘View,’ both conceptually and musically. Always a great all-round bass player (he’s been former Zappa guitarist Mike Keneally’s right hand man since the mid 90s, and is a member of Steve Vai’s String Theories band), Beller now seems even more comfortable as a solo artist, whether he’s grooving in the rhythm section, throwing out a Zappaesque flurry, or blazing a solo.

Styles on ‘Thanks In Advance’ range from fusion to rock to electronica, to the almost vintage R&B feel of the title track. Sonically, the production is a little more open and bright than ‘View,’ and the compositions appear to breathe a little more. The bass playing is as tasty as ever, and as you might expect, the bass is presented on a silver platter, front and centre when it’s called for or carefully mixed to support the song when needed.

‘Casual Lie Day’ is a cruisy, jazzy track with a groovy, deep bass tone and some very tasteful guitar playing, topped off with a clever horn arrangement which gathers strength as the song progresses. ‘Play Hard’ is an upbeat vocal song with definite rock radio appeal and a bright guitar pop kind of vibe. It sounds a little bit like something by the band Freak Kitchen, but more substance, less gimmicky flash.

Mike Keneally makes a powerful appearance on ‘Love Terror Adrenaline/Break Through,’ moving smoothly from sparse single note lines to complex melodies, to huge, bristling chords, to an almost vocal and deep solo, to all out freak out, then into epic harmonies. Those who haven’t witnessed Keneally’s particular splendour before will be bowled over by his ability to play very fast, very difficult pieces without sounding like a ‘shred guy.’

‘From Nothing’ caps off the album, featuring Zappa Plays Zappa saxophonist Scheila Gonzalez jamming over a high energy rhythm section. By the time the song winds down, the album is wrapped up with a sense of catharsis and optimism.

Thanks In Advance pre-orders begin on Monday September 15 at www.bryanbeller.com, and the album will be available from the end of September.