Check out this new colour for Ibanez’s FR2620 model. At the moment this one is only available in Japan. I first saw the FR series in person at a Paul Gilbert clinic earlier this year, when he used a black FR1620 to play ‘I Still See That Other Girl.’

The FR2620 model was already available in Dark Natural Sunburst. The new natural finish really shows off the ash body, and makes the FR look more like the Telecasters that obviously inspired it.

CLICK HERE to buy the Ibanez FR1620 in black

Here’s another one that goes back to my very first guitar magazine, the March 1991 issue of Guitar World with ZZ Top on the cover. George Lynch appeared in a Seymour Duncan ad for his Screamin’ Demon pickup, posing with this guitar. Naturally it was the coolest f***ing thing in the world to my 13-year-old self, and I’ve never stopped lusting after this guitar.

CLICK HERE to buy the ESP George Lynch M-1 Tiger electric guitar, since I couldn’t find a link for the Skulls & Snakes guitar 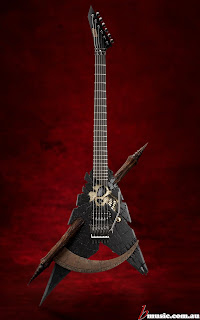 Got $20,000? Then perhaps this ESP Custom Shop Shinigami is for you. Specs are pretty hard to come by but does that even matter, with a guitar as demonic as this? Click on the image to see its evilness in greater detail. That’s no printed graphic either – this sucker is carved and painted.

This pic is from Bmusic’s website, which is well worth bookmarking for their huge selection of ESPs, a lot of which aren’t available in America, like this, this, this, this, and this.
Also, while googling for more info about the Shinigami, I found that Guitar Noise reported on this puppy back in January.

The Ibanez Xiphos was first released as a 6-string version with an Ibanez Edge III Floyd Rose-style bridge. The Xiphos gets its evil from looking like some kind of medieval weapon, but it also has a touch of glam with its eye-catching colour-change paint. Pictured is the extra-deadly 7-string version, which features Dimarzio D Activator 7 pickups, (designed to sound like actives, D Activators are also on the 6-string Xiphos), and a very heavy, sturdy Ibanez Gibraltar Custom 7 bridge.

Some players are a little anti-Xiphos because the shape is similar to the Jackson Warrior. Being an Ibanez fanboy, it doesn’t bother me one bit, and I hope some day they release a Japanese version with an Edge Zero bridge and prestige finishing.

There are many evil Sabbath albums, but the demonic alliance of Tony Iommi and Ronnie James Dio was never spookier than on this 1992 release. The production is swimming in natural reverb, making it sound like you’ve stumbled across the band playing in a crypt or something, and you can practically hear Dio throwing the devil horn hand gesture as he sings. Try to get through the opening riff of ‘After All (The Dead’ without getting the creeps.

30 minutes and 20-something seconds of thrash carnage. Topics include death, dying, mortality, killing, and being killed. Aside from a whole bunch of songs with running times less than two and a half minutes, there’s also ‘Raining Blood’ and ‘Angel of Death,’ each at almost 5 minutes, for those who like their evil to be bigger than snack size.

This album as a whole isn’t evil, but it includes the track ‘I Am Satan’ which begins with the count-off “1, 2, 3, 4, 5, 6, 6, 6!!!” and goes on to tell the tale of Satan falling in love with a chick, but freaking out about what she’ll do when she finds out who he is. Will she stay or will she go? ‘Burning Organ’ also includes the track ‘Suicide Lover,’ which features the classic line “She’s a suicide lover. You could say her love’s the bomb.”

Any album loaded with as many puns as this one has got to be evil. Puns are the most evil form of humour there is. This one also gets bonus spooky points for lines like “The angel of death is pissed off with me again, just because I got to put you out of my misery.”

What could be more evil than a demented alien who attacks earth because he needs a caffeine hit? Nothing, that’s what. Devin recorded and performed all of this monster album single-handedly, and it features some of his best melodic songwriting since Ocean Machine, as well as lots of brutal Strapping Young Lad-style metal.

This is obviously the most evil album of all time.

What better way to celebrate Halloween than with a few words from Mr Scary himself, George Lynch as part of I Heart Guitar’s ongoing series on the glory of distortion? The following is a little teaser of my interview with George for the upcoming edition of Mixdown magazine, out next week. A few weeks after that, I’ll post the extended version of the interview here.

PETER: What is your philosophy on distortion?
GEORGE LYNCH: Less is more.

PETER: Tell us about the Lynch Box amp with Randall. How does it adapt to your different musical personalities?
LYNCH: Dave Freeman, Bruce Egnator and I worked from the bottom up, designing modules that matched some of my favorite amps: early Boogie Recto’s, Marshall Plexis, Vox AC30s, etc.
I started out with Randall in the very early 80’s. I worked with Gary Sunds on the RG 100. So I’ve come full circle with them by getting on board again 25 years later. We plan on re-releasing the RG 100 amp in the next couple years. It was a very unique amp with a signature sound, and it was all transistor!