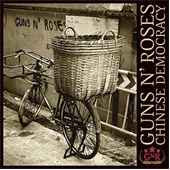 Before you can take an honest look at ‘Chinese Democracy,’ you have to address and then dismiss a few key facts: Yes, the only original member left is Axl Rose; yes, it’s 17years since ‘Use Your Illusion 1 & 2’; no, it’s probably not going to live up to the expectations created by that 17 year wait; and no, you can’t get your free Dr. Pepper unless you’re an American resident. It’s impossible to listen to this album without being aware of its history – starts, stops, hirings, firings, postponement after postponement. But ultimately this context has to be put aside if you have any chance of listening to the album for what it is: 14 songs by the guy who sang ‘Welcome To The Jungle.’

Opening with an atmospheric, chattering soundscape (courtesy of Eric Cardieaux, who has done a lot of work with Joe Satriani), followed by a heavily processed but very much rock-approved guitar riff, Axl suddenly breaks through the din with that famous scream, and the preceding 17 years are all but forgotten. The high notes are still there, and so is the attitude, and sure, the vocals could have been pieced together from studio sessions dating back to 2005, but Axl sounds happy to just be singing again. The sound is updated, semi-industrial, and very, very polished. It sounds like every dollar of the rumoured $14 million or so was used on the recording process rather than private jets and bike shorts.

Track 2, ‘Shackler’s Revenge’ continues, and in fact enhances, the industrial vibe with a pre-chorus straight out of the NIN songbook and a riff which would be at home on Max Cavalera’s Nailbomb side project. Track 3, ‘Better,’ is my frontrunner for song of the year. I can’t get this freaking thing out of my head, and that’s okay with me. Processed guitars and falsetto vocals set up the mood, and some on-the-off-beat guitar rhythms give the verses a sense of propulsion. Wild sweep-picked licks cap off the choruses, and Buckethead throws in a typically unpredictable ear-candy solo. Then NIN guitarist Robin Finck kicks in with a soulful, lyrical solo which reminds me of Ritchie Kotzen’s Telecaster tones and clean phrasing. Compared to the virtuosity of Buckethead and Ron ‘Thal’ Bumblefoot, Finck’s solo is reminiscent of the bluesier spirit Slash brought to the band.

Bumblefoot has a few cool guitar moments scattered throughout the album, as does Buckethead, and Finck can be relied upon for more tasty blues phrasing before the album is through, but for an act that’s so much a part of hard rock history (and with 6 guitarists listed in the credits if you count Axl), there’s less guitar here than you might expect. Around the middle of the album, things get very ‘November Rain.’ There are 4 midtempo piano songs in a row, coloured with varying degrees of drum loops and synth pads, at times sounding like the Bowie-and-electronica-influenced solo album of Queensryche’s Geoff Tate, and at other times recalling the ‘right up-to-date when it was released’ sounds of Sting’s ‘Brand New Day’ album – which would have been great news if Chinese Democracy was released in 2000, but which makes it sound a little dated today. The melodies are carefully crafted and the mood ranges from intimate to epic, and the overall pacing has a bit of a concert vibe (albeit compressed into just over an hour).

Piano time draws to a close and leads to the Zep-ish ‘Riad & The Bedouins,’ which has an almost prog vibe and some crushing guitar riffs, topped off with some classic 70s glam. The proggy vibe continues with ‘Sorry,’ which has a kind of 90s Black Sabbath vibe. Then ‘IRS’ brings in a bit of classic G’n’R rock mixed with more of that Tate-ish vibe. ‘Madagascar’ is another big epic, and one of a bunch of Chinese Democracy songs played on tour over the last few years. ‘This I Love’ is almost contemporary musical theatre with yet more piano and overblown arrangement, and finally ‘Prostitute’ caps off the album with some uptempo drums, soaring vocal melodies, and finally a quiet, peaceful orchestral finish.

‘Chinese Democracy’ may not be the greatest album of all time, but it’s surprisingly coherent despite its eclecticism, and while it comes close to collapsing under the weight of not only public anticipation but also its own overdubbed bloat, it seems to remain on track and provide a compelling listening experience. Sure, it’s not the album G’n’R would have made if Slash, Duff, Izzy, Gilby, Matt, or even Steven Alder were around, and it has its flaws, but if you treat it as an Axl solo album, you may be very pleasantly surprised. Just don’t expect a hard rock album.