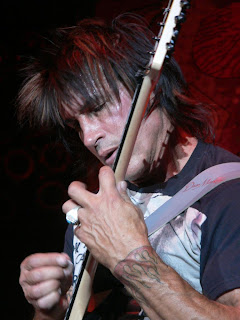 Mr Scary. That muscly guy from Dokken. The dude with the cool kamikaze print and 3D carved skull guitars. George Lynch has been cranking out warm-toned, complex riffs and impossibly catchy-yet-flashy guitar solos for over 25 years with various bands including Lynch Mob and Lynch/Pilson, as well as eclectic solo works like his 1993 classic ‘Sacred Groove.’ Lynch was in Australia for a clinic tour in 2006 and he’s returning in December with the reactivated Lynch Mob, who are demoing a new album before George goes back to work with his other band, Souls Of We, an altogether darker project whose album ‘Let The Truth Be Known’ is out now (click here to buy it from Amazon.com).

PETER: Who is in the Lynch Mob line-up now?

LYNCH: Oni Logan is back on vocals. We have Marco Mendoza (Whitesnake) on bass and Scott Coogan on drums.

PETER: From Brides of Destruction?

PETER: Are you guys recording anything now?

LYNCH: Yes, we have about 3/4 of the album done. We reconvene in late November to finish it, and will continue finishing it til the end of the year. But I’ve got a Souls of We record coming out, which has been five years of work. I’m not sure when that’s going to be released in Australia – actually I’m going to have to look into it. But it’s being released in Japan, the United States and Europe.

PETER: And how far along is the new Lynch Mob stuff? Do you have a label yet?

LYNCH: No, it’s too soon, we haven’t even shopped the record yet. We’re just writing songs. I don’t think these songs are even in the form they’re going to be on the record. We assumed it would be, well, we were aiming for a Wicked Sensation vibe, but I’m hestiant to say it’s more of a Fleetwood Mac, Bon Jovi vibe. It has elements of it, but of course it gets heavier.

PETER: What is the setlist like for these Lynch Mob gigs?

LYNCH: It’s a mix of the first Lynch Mob record, and sprinkled with a few Dokken tunes. Plus whatever we feel like jamming on that night!

PETER: A lot of my friends would kill me if I didn’t ask if you have any new ESP signature guitars in the works.

LYNCH: I’ve always got stuff in the pipeline. Right now I have a weird design on the table that will probably never be produced. It’s a Lexan body with a carbon fibre exoskeleton and a throbbing rose coloured LED embedded in the body. Maybe ESP will agree to build one as a NAMM showpiece. I’m hoping. Right now the newest model that I play is the ESP GL57, a vintage-y, beat up lookin’ copy of a vintage Strat, which I had a VG control built into. It’s like an extreme rock guitar for a Stevie Ray Vaughan.

PETER: How do you go about designing a guitar with ESP?

LYNCH: I start with a sketch. I studied mechanical drawing in school and I have a small design studio. I’ll start with a freehand design then move the shape over to a graphic program like Graphite. Then eventually to a full-blown CAD program like Maxicam. I also work with luthiers and finishers on the construction and selection of the components. I’ll work with Seymour Duncan on the pickups, and a machine shop on metal parts design. I designed a custom “V” tailpiece for the high end ESP Super V, but we never finished it.

PETER: You now have a few Seymour Duncan pickups, including the new Super V. What is the creative process in making a new signature pickup?

PETER: What is your philosophy on distortion?

PETER: How do you generate your distortion?

PETER: Tell us about the Lynch Box amp with Randall. How does it adapt to your different musical personalities?

LYNCH: Dave Freeman, Bruce Egnator and I worked from the bottom up, designing modules that matched some of my favorite amps: early Boogie Recto’s, Marshall Plexis, Vox AC30s, etc. I started out with Randall in the very early 80’s. I worked with Gary Sunds on the RG 100. So I’ve come full circle with them by getting on board again 25 years later. We plan on re-releasing the RG 100 amp in the next couple years. It was a very unique amp with a signature sound, and it was all transistor!

CLICK HERE to buy George Lynch’s Souls of We – Let the Truth Be Known from Amazon.com