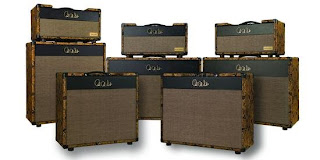 Remember that awesome Paul Reed Smith amp that was released in about 1991? The reviews were overwhelmingly positive but the amp didn’t last long, and it’s taken until now for PRS to jump into full-time amp production again.

“I met Doug Sewell at the Dallas International Guitar Show several years ago and needed an amp for that evening’s performance, so I borrowed one of his and was floored,” said Paul Smith. “We started working on this series and tried every conceivable component and circuit combination. Derek Trucks, David Grissom and several other known amp tone artists are now using this new amplifier line both live and in the studio. We’re pleased to be working with Doug and to have him leading the PRS amp team.”

Paying homage to both classic American as well as British amps, Sewell and Smith directed the PRS team to produce a line that covers the needs of varied playing styles while providing some uniquely different tonal possibilities.

The Dallas, Blue Sierra, and Original Sewell models make their official appearance at 2009 NAMM in Anaheim.

Paul Reed Smith is also totally about pickups this year:

Paul Reed Smith acquired exclusive rights to the original pickup wire from the original machine used to make the most revered ’50s era pickups in 2008, and 1957 was the year the humbucker was first commercially available, giving rise to PRS Guitars’ newest and most exclusive pickup, the 1957/2008. The new PRS Sunburst Series™, the McCarty II, the Al Di Meola Prism and a limited run of solid body electrics introduced at Experience PRS 2008 are presently the only models that come standard with 1957/2008 pickups.

Three models are offered as part of a 1957/2008 Limited Run: the Custom 24, the McCarty and the SC 245. Limited to 750 guitars, the limited run and the new Sunburst Series™ are the only place outside of Private Stock where brand new “old style” McCarty PRS models are currently available.

Paul Reed Smith joked during Experience PRS 2008 and said, “Think of it this way. We’re selling you access to these exclusive pickups and giving you a free guitar and case to go with them.”