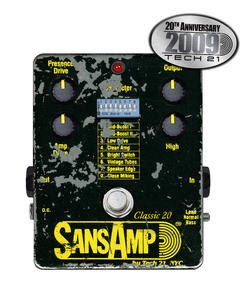 As if the news of the Tech 21 Private Stock division wasn’t noteworthy enough for devotees of fine analog amp modelling, the company is releasing a 20th anniversary version of the SansAmp, the revolutionary stompbox/direct recording device which changed the face of recording for many guitarists, including Mike Keneally who used one all over his album ‘hat.’

Now, just last week I saw a pair of SansAmp units at a secondhand store that looked pretty much like this, except it was achieved with good old-fashioned irresponsible mistreatment, not precise relicing. I know some I Heart Guitar readers are dead against the idea of relicing, so what do you think of this?

In celebration of their 20th anniversary, Tech 21 is releasing a special relic-style version of their SansAmp Classic. The exterior design is taken from an actual “vintage”SansAmp pedal used on a world tour by a renowned artist. The main heart of the circuitry and inner workings remain virtually unchanged.

The SansAmp Classic pedal is B. Andrew Barta’s innovative invention which debuted in 1989. It’s a little known fact that Barta never intended on becoming a manufacturer. He initially tried selling his technology to some of the major manufacturers, but was turned down. Unable to abandon his idea, Barta formed Tech 21 and set out on his own. In spite of the fact this kind of product had never before existed, it took a surprisingly short amount of time to gain acceptance. Players simply had to hear it. Players like Mick Jones of Foreigner, who, early on, helped Barta get the word out. The rest, as they say, is history.

Tech 21 pioneered the direct recording movement and was responsible for creating an entirely new category of signal processing. Barta’s proprietary, 100% analog technology captures the warm, rich, natural tones of the most sought-after tube amplifiers. SansAmp can be used with almost any instrument, for any music style, and for multiple applications in the studio as well as live performances. Currently, the SansAmp is available in 15 different models, including 5 in their SansAmp Character Series released in 2008.

Barta’s technology stands alone in the analog domain, a domain to which he remains loyal for several reasons. According to Barta, “Overall, I think analog is much warmer, more organic and more responsive. There’s also the issue of clarity. At extreme settings, digital tends to produce more “artifacts”(garbles) and unnatural noise in the background. So, in turn, this needs to be reduced by artificial means such as a noise gate, which I am not fond of. I also prefer analog because there’s no latency. No matter how minor it is, even with the improvements in digital technology, latency can still be felt and I find it distracting while I’m playing.”

Of the pedal formats, SansAmp Classic is the most sophisticated. There is a bank of eight Character switches to adjust tonality, harmonics and dynamics; a 3-position input switch offers a choice of pre-amp styles; and four knob controls to shape pre-amp contours, power amp contours, volume and final tone.