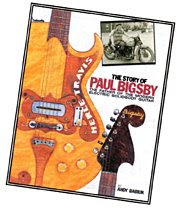 Let me preface this by saying Twitter is such a great way of disseminating information. I’ve seen this one tweeted and retweeted by several users in the past day or so. CLICK HERE for the Shadrick Guitar Blog’s article about guitarists on Twitter.

So, on to the news. The Story Of Paul Bigsby – Father Of The Modern Electric Guitar is a new book about one of the coolest, most daring guitar designers ever. No, I’m not talking about Young Einstein. As a Bigsby vibrato fan I’ve simply got to get my hands on this book. When I do I’ll post a review.