Welcome to the first of an ongoing series on I Heart Guitar, where I look at discontinued guitar models from various corners of the guitar world. Sometimes I’ll focus on specific brands or even specific model types, and other times I’ll look at broader families of guitar. Other times will be a bit like this one: a few interesting discontinued guitars with no particular link to each other. Let me know if you’d like me to write about one of your favourites, and if you happen to own one of these guitars don’t be shy about posting about it in the comment section.

Probably one of Gibson’s least Gibsony guitars, the M-III was released in 1992 and it didn’t take long for it to fall slip out of catalogues. With two humbuckers and a single coil, a Floyd Rose bridge, 24 frets and a snazzy reverse headstock, it looked more like some exotic custom from a shred-centric luthier than a guitar made by the pioneer of the demure carved-top single cutaway. A complex switching system gave players a huge range of sounds, but despite all its technical innovations the M-III just didn’t capture the imagination of players.
CLICK HERE to see Gibson M-IIIs on eBay.
Ibanez RG550 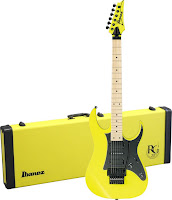 One of the most iconic ‘Superstrats’ around, the Ibanez RG550 was released in 1987. Essentially a Jem (Steve Vai’s model) without certain upscale appointments like fancy inlays and DiMarzio pickups, the spirit of the model lives on today in various other designs (RG1550, RG2550Z and many more), and was reissued as the RG500MXX (pictured) in honour of its 20th anniversary in 2007. Original RG550s can be found in pawnshops and eBay for ridiculously cheap prices. I snagged a black 1987 one with aftermarket Seymour Duncan and DiMarzio pickups for a mere 200 bucks Australian.
CLICK HERE to see Ibanez RG550s on eBay.
ESP/LTD Axxion

Megadeth’s Dave Mustaine has had more than his fair share of signature models: with Jackson he had various iterations of the King V and the Y2KV, and with Dean he now has the VMNT series which includes 7 different models. But in between those endorsement deals he spent a few years with ESP who offered the DV8 V design at various price points, as well as the Axxion. Released to celebrate 20 years of Megadeth, the Seymour Duncan-loaded Axxion was based on a shape Dave designed for Jackson but which was never produced. Examples are very hard to find but the Axxion is known as much for its rich tone and strong sustain as it is for its unorthodox shape.
CLICK HERE to see ESP Axxion guitars on eBay or CLICK HERE for the LTD version.
Fender Paisley Stratocaster

Reissued for a limited time in 2008 in a run of 400 (plus 600 Telecasters), the Paisley Stratocaster has got to be one of the coolest, psychedelic-est guitars ever. Made in Japan with modern features inlcuding a basswood body and a gloss polyurethane finish, offset by vintage-themed appointments like a traditional 6-screw tremolo bridge and 21 vintage-style frets, the Paisley Strat is a cool mix of old and new. I’ve played a few over the years and I find them to be quite adaptable to different musical styles, mainly due to the relatively flat response of the basswood.
CLICK HERE to see Fender Paisley Stratocasters on eBay.