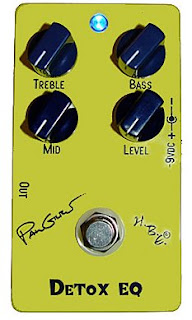 Signature gear. Who really needs it? Often the signature tag is merely an advertising tool selling hardware that probably bears no real resemblance to the equipment used by the artist whose name is plastered all over the marketing materials. There are exceptions of course… The perceptive reader will at this point be predicting that I am going to suggest that the Detox EQ is one of those exceptions. This is indeed the case, and for very good reasons.

My personal path to finding the Detox EQ was pretty straightforward. I have been using HBE (HomeBrew Electronics) pedals in my live rig for quite some time and have always been very happy with the sound and build quality. I have run their CPR Compressor, UNO MOS boost, THC Chorus and Germania 44 in various environments and they are all keepers.

I am also a fan of Mr. Paul Gilbert. Really, who isn’t? One day whilst trawling the internet for information on his effects rig I noted that he was using three of the same HBE pedals that are in my own rig. In addition he was using a then unfamiliar unit – the Detox EQ. Given I was already very happy with HBE pedals I was intrigued to know what the new pedal was doing for Paul’s sound.

The origins of the Detox EQ are based on Paul’s use of a single channel amp running with high gain and his need to be able to create a clean tone with minimal effort. Paul had been using a Boss EQ pedal for volume cut and tone shaping but found that it added extra noise and the EQ spread was not quite right for his purposes.

The Detox EQ is a very simple concept which HBE have realized in a very elegant and functional stomp box. There are four dials: level, treble, middle and bass. The pedal is powered by a typical 9vDC source (battery or external power). As with all HBE pedals it also features true bypass. It is a great looking pedal too – and we all know how much that matters – the yellow is quite striking and it just begs to be used.

The Detox EQ volume pot can be used as a signal boost to add saturation or as a cut to clean up the tone of raging, multiple tentacled high gain monster amp. The EQ facility also allows some additional tone shaping and the available frequencies are quite musically placed. The EQ dials do not give massive amounts of extra boost or cut to any of the frequencies but can create quite a consistent curve.

Running the Detox EQ with my highest gain amp, a Bogner Uberschall, the results were positive across the board. As a boost the Detox is nice and subtle – not as aggressive as the HBE Uno Mos or other clean boost pedals but certainly creating a very nice EQ shape when engaged. Due to the fact the pedal is so quiet you might be tempted to turn on, dial up and leave on at unity gain for a bit of extra flavour.

As a cut, the Detox gave me a gritty clean tone reminiscent of early Dixie Dregs with a nice amount of attitude in a much cleaner signal than the Bogner high gain channel would usually provide. Working with the two channel Uberschall the Detox running as a signal cut gives me a virtual third channel in between the angelic clean and high class hooker, dirty tones.

Running with a Bassman clone I was able to dial the amp hard to get some really nice power amp breakup and then rein it in back to a more sparkly clean by engaging the Detox with a small amount of cut. As a quick experiment I plugged the Detox into my Pod X3 and found that it added some very pleasing tonality to the digital signal output to my workstation. I think some people would definitely find that it adds a bit more of a natural tone to the digital modeling of the Line 6 and comparable units. 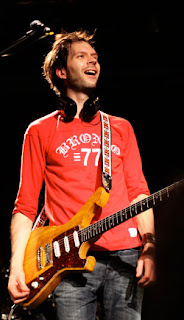 Cutting amp saturation by reducing guitar signal is not a new idea. People have been doing it for years by dialing back guitar volume pots. The benefit and value that the Detox adds is that you can EQ the signal to account for any frequency shifts that might occur based on dialing back the signal – something that can not be done through a guitar on its own. Plus, it happens instantly and the signal boost or reduction is predictable based on your pre dialed setting.

I am very pleased to say that the Detox EQ pedal is another winner within the Home Brew Electronics line of products. It is very, very quiet when engaged and I am considering buying another so I can run one as a cut and one as a slight boost with EQ curve around the mids. The tone when engaged is very articulated and adds a really nice flavour to picked notes and chords alike.

If you have heard Paul Gilbert’s Silence Followed By a Deafening Roar album then you have definitely heard the tone of this pedal as a cut and as a signal shaper at unity gain. This is one of the few examples of signature gear that really lives up to the name of the player and the hardware designer alike.

No, this pedal will not make you sound like Paul Gilbert nor will it magically make your amp sound just like the tones on the Roar album. What it will do is bring out some really nice characteristics of your own amp that you might not be able to achieve otherwise. I would consider it a good pedal to keep in a guitar case for gigs where you are running through gear that is unfamiliar.

If you are interested in how Paul uses this sweet pedal you can head over to the HBE site and check out his personal guide on how to run the Detox. I can confidently say that this pedal definitely does what it says on the packaging. What more can you ask for? Maybe some private lessons from Paul Gilbert? Good luck with that!

LINK: HomeBrewEletronics.com
Steve Turner is a guitarist from Melbourne, Australia. Check out his website here, his Myspace here and my interview with him here.