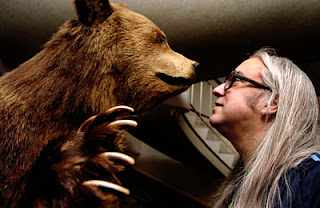 The story of Dinosaur Jr is one of your classic rock tales of formation, disintegration, reformation and vindication. Formed in 1984 with J Mascis on vocals and guitar, Lou Barlow on bass and Murph on guitar, they were in the right place at the right time when the 90s rolled around and fuzzed-out stony rock was in. Mascis combined thick walls of high-gain guitars, unforced melodies and a wild lead style which seemed to say ‘I’m not ashamed of being a killer soloist but I’m going to do it my way.’ Barlow was booted in 1989 and went on to big things with his side-band Sebadoh. Things seemed to be going great for Dinosaur Jr when they signed to a major label in 1990 and they had a dream run for a few years, peaking with the single ‘Start Choppin,’ which did big chart business especially in the UK. But after the tour for the Where You Been album Murph jumped ship too, leaving Mascis as the only original member, and the Dinosaur Jr name was officially retired after 1997’s Hand It Over CD.

After spending some time out on his own with J Mascis & The Fog, Mascis and Barlow started talking again in 2005. A new album, Beyond, arrived in 2007 and now here we are in 2009 talking about Farm, a return of sorts to the sounds of the Where You Been era. We’re talking fuzzed out guitars tones, ringing chords, wild solos and powerful melodies. What’s made Dinosaur Jr so great over the years is the undercurrent of pop songcraft bubbling just below the surface. Not pop in the FM radio sense, mind, but in the ‘great melodies and unforgettable hooks’ way.

Mascis is notoriously difficult to interview. That doesn’t mean he’s a stroppy primadonna or a jerk – nope, he’s just famously guarded and reserved in his answers. He obviously prefers to let his music do the talking. In the 90s one of the American guitar magazines figured that the best way to get an animated interview out of Mascis was to take him on a tour of pawnshops and guitar stores, bring along a camera and tape recorder, and shout some vintage guitar gear for him. It worked: Mascis opened up and revealed himself as a guy who just wants to create, and who has a deep love of and respect for classic guitar gear.

Farm was recorded in Mascis’s home studio. I figured that asking about gear was a good place to start our conversation. “It’s on the top floor, the third floor of the house. We recorded to Pro Tools. We have a pretty good setup. It sounds pretty good. And we mixed to tape. I’ve got a lot of cool mic preamps, mic stuff. We did the basic tracks live but we only kept the drums. I had two main recording setups: a Gibson Les Paul Junior through a tweed Fender Deluxe amp, and lead is more like just the 58 Fender Telecaster through a Vox Super Berkeley which is sorta the American AC15 from the 60s. And a lot of fuzz boxes. A lot of different ones. I just plug in a bunch of fuzz boxes, like I’d use a Roland BeeBaa Fuzz, a Super Fuzz, Big Cheese Love Tone, an Analog Man. I’d just plug in a bunch of pedals together and see what it sounded like.”

Thinking back to that ‘spending spree’ guitar magazine interview, I asked Mascis where he liked to do his pedal shopping these days. “Nowadays mostly eBay. In the 90s there used to be a few stores in the states which had a lot of cool pedals, that I’d go to on tour. But it doesn’t seem like that now, those stores don’t really do that any more. Occasionally you’ll still get some good deals. My friend bought a Marshall Plexi stack for like 25 hundred dollars.” 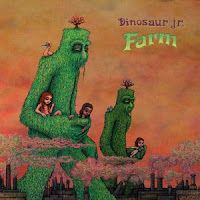 The song ‘Over It’ includes a raging wah wah sound in the intro which I had to ask Mascis about. “It’s a Vox wah wah, a new one. I think it might be between five and nine tracks at once.” I told Mascis that my 2-year-old loved that particular song: he started dancing when it came on, and shouted “Dadda, that BRILLIANT!”. “Yeah, I have a kid too, he’s almost two. Whenever he hears it he goes ‘Pappa!’ and starts headbanging.”

). Mascis’s variant on this classic design features an impossible-to-miss sparkly purple finish. It’s a surprisingly eye-catching detail for a guy as low-key as Mascis, but at the same time it reflects the energy and inventiveness of his lead guitar style. “The Jazzmaster was the first guitar I bought so I learned how to play on it. I wrote a lot of songs on it, so I’ve kinda got to play them on the Jazzmaster. I have a few, maybe um… five or six old ones. A few new ones. Then I got some stolen.”

The track ‘I Don’t Wanna Go There’ is one of my particular favourites on Farm. At almost nine minutes it includes a huge, all-encompassing Mascis solo. Tucked away at the end of the album, it seems to actually reenergise the album right when you expect it to maybe start winding down. “I guess we’re always trying to test the limits of how long people can stand guitar solos,” Mascis chuckled. “I think it’s probably mostly one take, mixed with other ones. I remember the song was even longer but you know, I wanted just enough room to say it. Right now that’s the only one we’re gonna play. We’ve got to learn some! We figure the album’s not out yet so we’ve got time.”