I was psyched to check out the new line-up of Unclechunk. After all, the latest addition is bass player Rohan Drew, a dude I have much respect for due to his time holding down the low end in The Upperhand. And even moreso because by a twist of fate I ended up in The Upperhand myself and had the pleasure of watching him rock out on a regular basis from right there on stage with him. Dude’s got chops to spare and a sense of rhythm like you can’t believe. Ro and I are still working on stuff together but it’s awesome to experience his mad bass skillz as an audience member again.

As for Unclechunk, how do you describe this band? Ok, imagine Faith No More in their ‘King For A Day’ era, crossed with Primus, crossed with too much red cordial and not enough sleep. Mike and Marc Russo on guitar and drums respectively (they share vocal duties) have been rockin’ together since 2001. Striding out onto a stage festooned with all manner of handmade japery (see pic!), there’s a certain kind of manic energy swirling around Unclechunk. You kinda get the feeling you’re being invited into someone else’s very defined yet quite twisted world. And it’s awesome to be there, even if you’re not quite sure what’s going on half of the time. But that’s ok because you get the feeling the band is in complete control. Crunchy riffs frolic about with groove-heavy single-note lines, broken up by the occasional staccato burst and all tied together with the most finely-honed conglomeration of guitar tones you’re likely to hear.

The band were really cookin’ tonight, and honoured the crowd with a handful of new tracks which fully take advantage of the bass talents of Mr Drew. It was only his second show with the band (and with his new Spector six-string bass), by the way. I was especially impressed by the near-psychic interplay between all three members, and especially especially impressed by Marc’s drumming, which is reminiscent of some of Terry Bozzio’s work crossed with Rush’s Neil Pert on a caffeine jag. Mike’s guitar style is eminently listenable and effortlessly intricate, like the best of Trey Spruance crossed with Dweezil Zappa during the Z era. Y’know, progressive and with occasional bursts of technical fury but without sounding pompous or clinical about it. And the riffage, my god, the riffage. To be honest I’d like to poach all three of these guys to be the rhythm section for my solo instrumental stuff, but I shouldn’t be greedy.

Mike gets special points from me for slinging a Washburn Culprit (one of the lesser-known Dimebag Darrell models, dontcha know), also hoisting an Aussie-made Maton Mastersound for one song. And anyone who rocks a Mesa/Boogie Triaxis preamp is cool by me!

For more info about Unclechunk, hit up the website here or the myspace here.

Thanks to Nathan English for the photos. 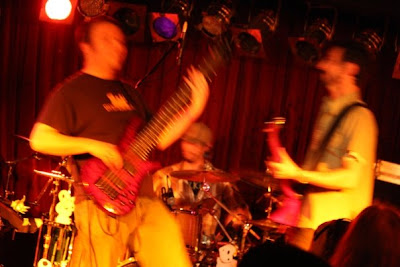 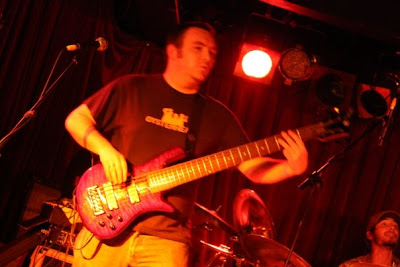 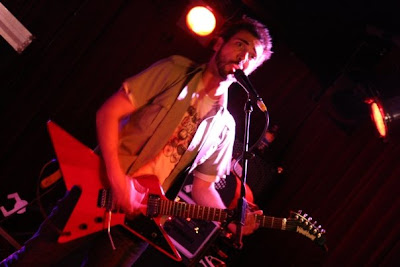 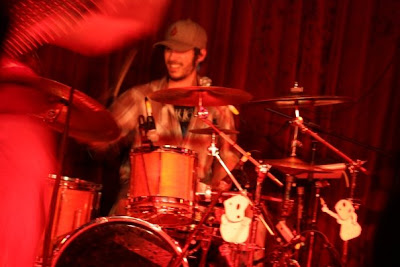 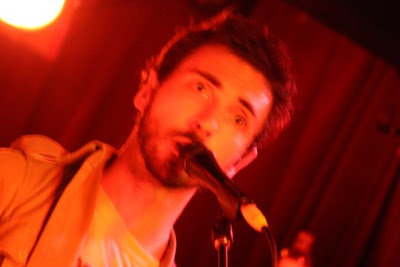 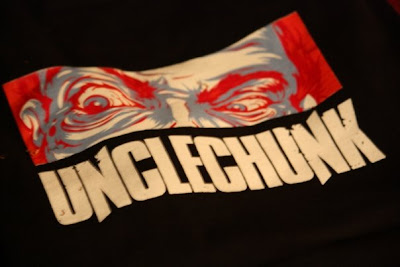