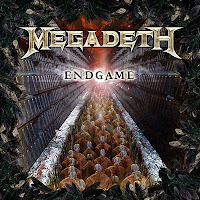 The first thing you hear bursting out of the gates on the new Megadeth album, Endgame (Roadrunner) is a thunderous, crunching riff leading into one huge back-and-forth solo-fest from Dave Mustaine and new guitarist Chris Broderick on the track ‘Dialectic Chaos.’ The tones are huge, the drumming relentless, and my freaking god Broderick is fast. Dave has said in the past that when his sparring partner was Marty Friedman, the contrast was that Marty played with a lot of love while Dave played with a lot of hate. Now, while I liked Glen Drover’s playing on United Abominations and live, his playing just didn’t have the passion and fire of Marty’s. It had a similar love of the guitar, but not the kind of love-you-so-fucking-much-I-want-to-have-you-right-here-right-now, dirty love that Marty had for his axe. Well, that fire is there in Broderick’s playing. It’s fast, precise and melodic, but intense, energetic, powerful and sometimes downright obscene, in the best possible way. In Broderick Mustaine has a co-guitarist who packs as much snarl and power into his playing as Dave does.

Yet for all its precision riffage and lead guitar mayhem, ‘Dialectic Chaos’ is still only the intro to the album proper, segueing into ‘This Day We Fight.’ With lyrics inspired by Lord of the Rings and riffs inspired by fighting for your frigging life as a horde of hellbeasts bare down on you, this track is at once vintage and future Megadeth. You’ll hear remnants of the same hyperaggression of ‘Rust In Peace (Polaris), ‘Take No Prisoners’ and ‘Poison Was The Cure’ from Rust In Peace, but fed through the more modern approach of tracks like ‘Kick The Chair’ from The System Has Failed and ‘Sleepwalker from’ United Abominations. With lyrics inspired by Lord of the Rings and some of the most pissed-off playing and vocal delivery of his career, Mustaine’s out for blood.

‘44 Minutes’ might remind some listeners of the balance of melody and aggression displayed on Countdown To Extinction tracks like ‘Symphony Of Destruction’ and ‘Architecture of Aggression’ but with the added heaviness that seems to come from just being in the mere presence of such an intense track of ‘This Day We Fight.’ It’s like some of the power and brutality of ‘This Day We Fight’ has actually leeched out of the track and into the rest of the album. After garbled police dispatch messages introduce the track, a growling James Lomenzo bass line is punctuated by stop-start guitar rhythms and a relatively restrained vocal line from a more narrative-driven Mustaine than the ‘in-the-moment,’ pissed off Dave we hear on ‘This Day We Fight.’ I’ve been listening to the album for about half a week now and this is my favourite track by far, and one of my favourite all-time Megadeth songs. By the way, the last 8 bars of ‘44 Minutes’ will probably kill about 94% of the guitar players you know, and seriously wound the pride of the remaining 6%. So say your goodbyes.

Now ‘1,320.’ Megadeth hasn’t done a song quite like this since ‘High Speed Dirt’ on Countdown To Extinction. But while Countdown was a meticulously crafted, evil cyborg of an album, there’s a pissed-offedness to Endgame which propels this track forward like the nitro-burnin’ funny cars it honours. Hold on for another wild back-and-forth Mustaine/Broderick guitar solo tag team, interspersed with cool harmonies. This one’s going to kill live.

Interestingly, ‘The Hand That Feeds’ also reminds me a little of ‘High Speed Dirt’ – both have chugging riffs that alternate between palm-muted pedal tones and higher chord stabs, as well as half-time sections. That’s not to say it’s a copy or rehash of ‘High Speed Dirt’ – it’s Mustaine’s sound so he has every friggin’ right to use it. By the way, this track contains one of my favourite Mustaine vocal deliveries ever, on the line ‘The roaches lick the cupboards clean of TV dinners …and beer.” There’s also a very cool end section which has an almost metallic shuffle feel. This is quite a proggy track with lots of riffage to dig your teeth into.

Next we have ‘Bodies.’ This one seems to bolt a bit of a United Abominations feel onto the songwriting of Youthanasia or Cryptic Writings, but Dave’s rhythm tone is bitier and more aggressive than anything on those albums. It’s more akin to his Rust In Peace era tone but twice as distorted and more compressed. The middle section includes what almost sounds like a nod to ‘While My Guitar Gently Weeps,’ before going all orchestral and proggy. If you heard just this section without knowing the artist you’d probably be surprised to find out it’s Megadeth, until an absolute prototypical Mega riff bridges the section to an intense thrashout.

I almost feel bad comparing tracks on Endgame to stuff from Megadeth’s extensive back catalog, so it’s at this point in the review that I’ve gotta step in and emphasise that this really sounds like Endgame, not a collection of rehashes of past tracks. The comparisons are just provided to give you a rough idea of the general vibe of the tracks. Got that? Ok good, cos the title track ‘Endgame’ kinda reads like a sequel to ‘Youthanasia’ in feel and theme. It’s almost like Mustaine is revisiting the bleak warning of ‘Youthanasia’ and taking it to its ultimate dystopian conclusion. Once again the arrangements are quite proggy. About ¾ of the way in, we revisit several of the musical feels established on Killing Is My Business …And Business Is Good, except updated for 2009. It’s an intense ride, and despite the gritted teeth of Mustaine’s vocal delivery you can kinda imagine him grinning at how much fun it must be to play a track like this.

Hey, how did you feel about Risk? Cos that might determine how you feel about ‘The Hardest Part Of Letting Go …Sealed With A Kiss’ Here we find the more melodic, orchestrational Dave, with a heartfelt and nuanced vocal delivery. The opening section contains delicate acoustic guitars including a little classical guitar mixed down low and some electric harmonies, before everything brutals back up again. Check out the riff at 1:52 to hear Megadeth showing Dream Theater how to really pull off the prog metal thing. This could very well be considered a centrepiece track, and it’ll be very interesting to see if it makes it into the live set.

‘Head Crusher.’ I’m sure everyone’s heard this by now – another pass at the ‘Sleepwalker’ vibe, and an odd choice for first single. To be honest I’d much rather hear ‘44 Minutes’ as the first single – it’s melodic yet heavy and instantly memorable, whereas ‘Head Crusher’ took me a few listens to get my ears around. It’s unrelenting and furious, with monstrous shredding throughout and particularly in the solo, but while I think it was a great choice of track to show metal fans that Megadeth were sitting on a pretty intense album, I can’t help thinking it would have been better left as a teaser, or at least used as a teaser then held off to be the second single. That said, you really can’t fault the song.

‘How The Story Ends.’ More crushingly thick Mustaine rhythm tone with punchy muted single notes mingling with chord stabs. Drummer Shawn Drover is a star on this one. Great memorable chorus, somewhat like something from the Cryptic Writings era but once again undeniably Endgame. Broderick brings out the acoustic for a little flamenco moment, showing that even though he’s an unstoppable shred machine, he can also play it sensitive. The following electric solo is an arpeggiated tour de force which could grow to be a show stopper in a similar way to Marty Friedman’s ‘Tornado Of Souls’ lead – it’s not as long but probably packs in four times as many notes!

‘Nothing Left To Lose’ opens with a creeping James Lomenzo bassline before a big Mustaine riff kicks in. It just fits as a closing track, in a similar way to how Megadeth could not possibly have ended Countdown To Extinction with any song other than ‘Ashes In Your Mouth.’ Chuggy guitars in the verses, big harmonies in the choruses, double-time solo… A kickass track that probably wouldn’t work so well earlier in the album but is right at home here. Classic Mustaine ‘wide stretch’ solo too.

Other thoughts: Shawn Drover’s sound on Endgame is more natural and open than on United Abominations. The word is that producer Andy Sneap decided to go with real drum sounds as opposed to samples this time round, and the added dynamic range recalls Vinnie Colaiuta’s work on The System Has Failed. Also, James Lomenzo has proven himself to be an indispensable part of Megadeth’s sound. He doesn’t roam as much as he did in Zakk Wylde’s Pride & Glory, but he provides a solid, powerful low end and a confident, powerful tone.

And Sneap. Sneap, Sneap, Sneap, Sneap, Sneap. Awesome producer but there’s always a fear that anything he touches will end up sounding like ‘an Andy Sneap record.’ That’s certainly not the case here. While I can’t help feeling that he may have influenced the level of distortion on Dave’s guitars just a little, he seems to have focused on getting the best Megadeth performances possible on Endgame without really stamping his sonic footprint on anything.

So that’s Endgame. Where do I rank it compared to its predecessors? Well I’ve been thinking about this a lot, and the more I listen to it, the more I like it. As of today I’d rank it equal second with Countdown To Extinction, Rust In Peace being number one. I know that probably sounds like a huge call – bands aren’t meant to make super-great albums this far into their career, right? We’d be happy with ‘Well, it doesn’t suck,’ yeah? – but it’s really that good. The fact that Mustaine is out there cranking out soon-to-be-classics like ‘44 Minutes,’ ‘This Day We Fight,’ ‘The Hardest Part Of Letting Go’ and ‘Bodies’ in 2009 when most of his contemporaries are… nah, y’know what? I’m not gonna go there. Endgame should be appreciated on its own merits, for what it is. And what it is, is one of Megadeth’s finest moments.