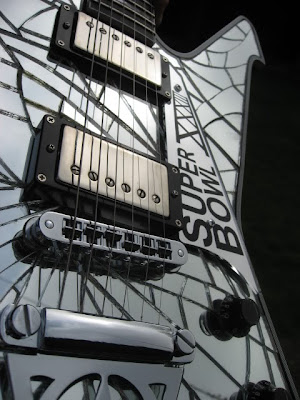 Wow, it’s a big week for ex-rockstar axes being sold on eBay. First Nine Inch Nails offload an arsenal of axes, now this: The Washburn Black Diamond played by Paul Stanley at the 1999 Super Bowl. Rad!

Here are some details from the listing:

PLAYED ON 31 JANUARY 1999 AT THE SUPERBOWL XXXIII at the Pro Player Stadium, Miami, Florida

Comes with FULL and personalized COA and is also signed on the guitar back, and well documented in both rock and American History..

This is NOT just your typically signed limited edition guitar, This is Paul Stanley’s Personal and customised Black Diamond No 9, ONE OF A KIND, “Played” live in front of America and across the world

This is it…… This is KISSTORY ….this is THE SUPERBOWL GUITAR …….

SET UP TO SUIT PAUL STANLEY AND CUSTOMISED WITH THE UNIQUE SUPERBOWL PICKGUARD. PERSONALLY SIGNED AND DATED ON THE BACK PLEASE NOTE – THERE IS A NUMBER OF SMALL PERFORMANCE SCRATCHES ON THE BACK OF THE GUITAR CAUSED BY PAUL`S STUDDED COSTUME. AND SIGNING THE DATE OVER THESE HAVE CAUSED THE DATE TO RUN AND BLUR, HOWEVER THIS IS EXACTLY AS THE GUITAR WAS SIGNED.

The Guitar has only been strummed a few time since !!!!

There were Only 3 guitars taken to the Superbowl. There were 2 backup guitars – one being the Green PS200 which is in the Pro Football Hall of Fame in Canton, Ohio. The other is a black version which is in the BSG collection …. But there is only one Original

The Washburn Paul Stanley Model PS2000M Black Diamond Cracked Mirror #9 of 100. Is a Mahogany Body, Maple Top, Mahogany Neck Ebony Fingerboard with pearl/abalaone/pearl block inlays. Buzz Feiten Tuning System, Seymour Duncan SH6 Distortion and a 59′ model in the neck. Multiple layer binding on body and headstock. This guitar originally had a list price of $10,000.00 and the first Guitars were sold for that price, and the run was never finished !!

So you can see what a steal this piece of Kisstory actually is.

Comes with a custom G&C leather case with black crushed velvet lining made for the Limited edition Black Diamond.

You can see Stanley use the guitar in this video: