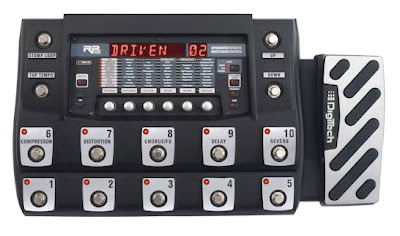 Guitarists are forever locked in an epic battle between functionality and flexibility. We dig effects, but we prefer if they’re in the form of little boxes with easy-to-use controls. We love combining different sounds to create something new, but loathe doing the little tapdance required to turn them all on (or off) at the right time. Floor-based multi effect units are great, but most are designed to be the entire source of your sound, so you’re stuck, for better or worse, with whatever amp models are built in.

The new Digitech RP1000 takes a lot of the features that have made the RP series so popular, and integrates with your amp by allowing you to place the unit’s effects either before or after your preamp – kinda like having a pile of stompboxes on the floor and an effects rack plugged into the amp’s effects loop. There’s a roundabout way to do this with the Boss GT-8

, which I used on stage for a while, but it was an unintended side effect of the design, and required all sorts of special cables and hum eliminators to work. The RP1000 is specifically designed to do it, so that’s one big advantage right there.

The RP1000 has over 160 internal stompboxes, effects, amps and cabinets, as well as an additional stompbox loop. Say you have a particular pedal you just can’t live without, but you want to use the RP1000 too: just place that pedal in the loop and you can turn it on and off within your patches. Neat. Oh and as an added bonus, you get Cubase LE4 recording software too!

Features include 14 very chunky, confidence-giving metal switches that control program changes, effects on/off, stompbox loop in/out, bank up/down, and the built-in 20-second looper (on the day I received the RP1000 to review, I’d been listening to a lot of David Torn

, so I was in loop heaven). There are two different control modes: Preset and Pedalboard. In Preset mode you can switch up to 10 different presets on a single bank, while in Pedalboard mode there are 5 presets and 5 effect on/off switches. Think of Pedalboard mode as 5 different amp and pedal rigs, with the ability to turn on or off any pedal for that setup. Additionally, if you want to use your amp’s natural sound as the basis for your tone (instead of the RP1000’s amp models), there’s an internal Amp/Cabinet Bypass switch which removes the RP1000’s internal amplifiers and cabinet effects from the signal chain, leaving only stompboxes and effects.

One particular benefit of the RP1000 compared to most other multi effect floor units is that it includes dual stereo XLR outputs for going straight into a mixing desk. I plugged it into my DigiDesign Mbox 2

for some very accurate and clear reproduction of the sounds, and was particularly impressed by the edgy clean sounds and the Lexicon-licensed reverb effects.

I was able to compare some of the models to examples of the actual gear I had laying around, including the Marshall JCM2000, and the MXR Phase 90, and while the modelled sounds aren’t 100% spot on (with the exception of the extremely accurate DOD FX25 envelope filter, another unit I have kicking around the house), they sound close enough to give you most of the same vibe. I found that the stomp box models worked especially well with my amp instead of the inbuilt amp models. My favourites were the trigger flanger (very Frank Zappa); the DOD FX13 Gonkulator Modulator, which is great for Nine Inch Nails-style processed guitar sounds, and the harmonizer, which includes major and minor scales in all keys, as well as settings for some of the modes, for those who aren’t totally into their music theory. I especially liked the harmonic minor scale setting for instant Yngwie. You can set most effects to be either pre or post amp (or amp model), which is a huge benefit for those who need their phaser to sound spacey (after the amp) in one song, and syrupy (before the amp) in another, for example.

I found that the Carvin Legacy model didn’t sound like the actual amp, but if you’re after Vai tone you can get quite close by combining the JCM900 and Tube Screamer models with some digital delay and reverb. On the other hand, the acoustic guitar models sound surprisingly accurate and are very useful, and the various Mesa Boogie models are also pretty close to the real thing. I slung my Ibanez UV777BK

seven string with DiMarzio Blaze pickups and dialled in a Petrucci-like Awake-era tone, kicking in the wah wah to get in the ‘Caught In A Web’ zone. Cool!

My only beef with the RP1000 is that there is no way to switch amp channels, which slightly limits the practicality of the unit – you may have to get used to having all your settings and effects stored on individual buttons for your clean, rhythm and lead sounds, but needing to step on a separate amp channel switch as well. One way around this would be to use varying levels of distortion pedal on top of your clean sound. Another would be to set up your amp with your medium-level distortion sound, then create a patch that drops out some frequencies and reduces the input (similar to lowering your guitar’s volume control) for a clean sound, and adding a boost or overdrive to kick it up to high gain territory. This is what Paul Gilbert does with a bunch of pedals and a single-channel amp, so an argument could be made that the RP1000 makes this method much easier.