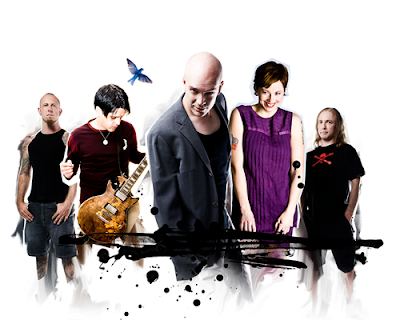 Have you heard Devin Townsend’s killer new CD Addicted yet? I’ve given it more than a few spins – in fact I think I listened to it at least once a day for almost a month. Anyway, Devin is about to embark on a tour to promote the album and, if you will, launch his post-Strapping Young Lad career, finally giving his awesome solo work the attention and focus it deserves. You can catch him on tour with Scale The Summit, Cynic and Between The Buried And Me playing short little sets, but after that Devy is heading to Australia to play full headlining shows that are going to be freaking huge. Want an idea of how huge? Then check out this rehearsal footage of Devy and crew playing ‘By Your Command’ from Ziltoid The Omniscient!

If you go to the actual YouTube page for the video you’ll see this message:

Here’s a short clip of a DTP rehearsal, no overdubs, no fixes. We plan to have a choir for the tours coming up after January to cover the background vocals. My plan was ALWAYS to make the live experience tight, and like the record (with a few surprises…) This was our first take of By Your Command that day.


I am thrilled to be able to come play for you, thank you for allowing me to continue doing whatever it is I do. I believe now is the start of it all, What I want to do is pretty epic in terms of live concerts, I think my dissatisfaction with shows in the past is that I want to see and provide people with an EVENT, a spectacle… and the music is the soundtrack to the experience. First things first is getting the new band tight and disciplined, we’re ready to play this first tour (our first one) with BTBAM, Cynic, and Scale The Summit. When I complete ‘Deconstruction’ I believe we’ll have every musical base covered to make a heck of a statement.


Have a great new year folks, keep it strong, keep it brutal. Keep it quiet, keep it gentle.

Devin will be appearing at NAMM at the following times:

I’ll be checking out the Alvarez set and probably the Peavey appearance too.

(Keep an eye out for New Zealand dates too!)