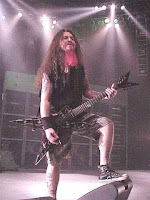 Prog’s basic tone is similar to thrash, but with more midrange and, typically, passive humbuckers. You’ll need a slightly warmer sound that is able to work with notes all over the fretboard because you’ll probably be playing long single note lines that take you from the low strings to the high ones within a microsecond or two. Also look for a sound that has good note definition within chords – you’ll need it once you start stacking those 9ths and 11ths on top of your 7ths.

The hardcore sound also has some similarities with the thrash tones of yore: very high output pickups, and oodles of amp distortion with a minimum of speaker breakup. The Peavey 6505 is a very popular hardcore amp, but other models by Rivera, Hughes & Kettner, EVH and Mesa Boogie seem pretty popular too. Aim for an aggressive tone with lots of upper midrange, perhaps emphasised by a Tube Screamer or similar overdrive pedal. You need to strike a balance between up-front note impact (after all, you’ll be picking some pretty damn precise riffage at high speed) and a full, bass-heavy body. This is one instance where you really have to get to know your rig and how it reacts to various picking strengths.

While its origins are with bands like Meshuggah, the current hero of Djent is Misha ‘Bulb’ Mansoor of Periphery. The term itself is an onomatopoeic representation of what it sounds like: a heavily distorted electric guitar (often downtuned or extended range) rocking a heavily palm-muted octave power chord. Djent Djent Djent. There’s a whole online community dedicated to the perfect djent, so there’s plenty of info out there on how to achieve it. You’ll need to cut the bass below 200Hk, boost 800hz for the body of the note, and goose 1.6Khz to really bring out the pick attack. Again the sound is helped along on its way with a Tube Screamer type overdrive, but make sure you’re using a pretty tight noise gate to cut out any non-djent artifacts.

This article is an expanded version of a column for beginning metalheads which originally ran in Mixdown magazine.