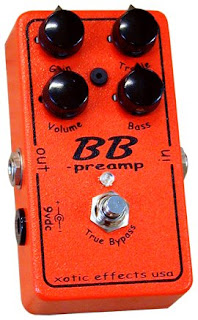 Xotic Effects USA pedals are used by some of the most respected guitarists in the biz, including jazzer and sometimes bluesman Scott Henderson, Andy Timmons, and the nicest shredder in rock, Paul Gilbert. These boutique pedals are highly desired for their roadworthy construction and transparent tone. On the surface, the three most well-known Xotic pedals seem to be quite similar. The AC Booster, RC Booster and BB Preamp all feature volume, bass, treble and gain controls in the same layout. In particular, the RC Booster and BB Preamp may look similar on paper, but there are key differences.

The RC Booster (favoured by Paul Gilbert) offers a super transparent 20db+ clean boost and a +- 15db 2 band active EQ. The BB Preamp ups the stakes in terms of available clean boost, with up to 30dB+ available. The BB also has a pre-gain stage which allows the pedal to more closely mimic the characteristics of an amplifier. The pedal includes true bypass, so the circuit is completely removed from your signal chain when the effect is disengaged.

The trick with this pedal is to think of the volume and gain controls as two separate and different distortion settings. Turning up the pedal’s volume control while using a valve amp will push the amp’s preamp harder, making it distort naturally without actually changing the tone. Notes and chords become fuller and more powerful, with greater sustain and body. Turning up the pedal’s gain control introduces a more compressed overdrive character which different to that achieved by increasing the volume.

At lower gain settings the true character of your guitar tone is maintained, but the bass and treble controls let you tailer the high and low end response. The Talman’s split coil setting sounded especially sparkly and Strat-like with the pedal’s treble boosted and the bass reigned in a little bit. The Telecaster’s bridge pickup benefited from boosting the bass and nudging the treble up just a touch beyond the flat setting.

Increasing the gain control introduced a slightly vocal response which combined well with lower treble settings for a creamy, musical overdrive. Boosting the gain and the volume at the same time created a squashed sound somewhat similar to tape compression.

The BB Preamp is a very clever pedal with a far wider range of applications than its small size might indicate. It’s great for blues, rock or jazz players looking to impart a little grit to their tone without crossing over to mega distortion, while rock players who wish to drive an already distorted tone into the stratosphere will also find a lot to be happy about with this little orange wonder.

[geo-in country=”Australia” note=””]Xotic pedals are distributed in Australia by Global Sound Technology. You can pick up the BB Preamp from RMC Music and Pro Guitar.[/geo-in]