Blackstar amps are famously versatile and user-friendly, but there’s always room for any company to innovate. And innovate they have, with their ID:Series amps and now the ID:Core line. The thing that’s so revolutionary about the ID:Core line (and there are stereo combos available in 10 watt, 20 watt and 40 watt configurations) is that on the surface they’re as easily controllable as any other Blackstar amp, especially due to the handy ISF (Infinite Shape Feature) control which gives you a range of tones from UK to US and any point in between. But the free Insider software lets you fully unlock the potential of the amp by plugging it into your computer and taking your preset-editing to a whole other level.

END_OF_DOCUMENT_TOKEN_TO_BE_REPLACED

Blackstar is no longer the new kid on the block in the amp world, and while they’ve done a great job of quickly establishing themselves as a name to be reckoned with, their amp offerings can sometimes feel a little ‘samey’ – there’s a lot of crossover between different amp model lines in terms of what they can do, and at a certain point it becomes “How many channels do you want to work with? How many speakers? How loud?” That’s great but there’s also room for Blackstar to innovate. And innovate they have, with their ID:Series amps and now the ID:Core line.  END_OF_DOCUMENT_TOKEN_TO_BE_REPLACED

Gus G requires a lot from his amps. He needs them to keep up with his power metal shredding in Firewind, but he also demands that they keep up with the various eras of rock and metal tone that he needs to convey during the course of a typical Ozzy Osbourne set. As Ozzy’s guitarist he has to dip into vintage 70s metal, 80s neoclassical and hard rock, the more gained-out approach of Zakk Wylde and his own, modern-voiced Ozzy material. The Blackstar Blackfire 200 is a 200 watt beast of an amp designed to pump out the required tones at the required volumes.

END_OF_DOCUMENT_TOKEN_TO_BE_REPLACED

Blackstar have been working closely with guitar hero Gus G. (Ozzy Osbourne, Firewind) to create the ultimate heavy metal amp. Based on Blackstar’s award winning Series One 200 amp design, this 200-watt, limited edition amplifier has been voiced in partnership with Gus G.

Four switchable channels are offered: a Clean channel with Warm and Bright modes,
a Crunch channel with Crunch and Super Crunch modes, plus Fire and Fury overdrive channels specially voiced in partnership with Gus G. for a devastating full metal assault.

END_OF_DOCUMENT_TOKEN_TO_BE_REPLACED 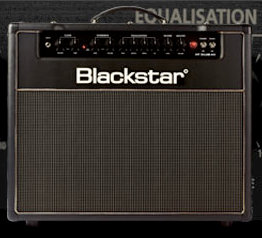 The HT Club 40 is powered by a pair of EL34B-STRs by TAD and a couple of Sovtek 12AX7s in the preamp. The EL34s are based on the early Mullard/Philips EL34 but are designed to be more stable. The speaker is a lone Celestion Seventy 80. The valves and speaker are accessed by removing the back panel. There’s a degree of ventilation for the tubes but the effect on sound is minimal and you’re essentially plugged into a sealed-back cabinet – great for tight rock tones.

Controls left to right are volume, voice switch and tone for the clean channel; OD Select button; then gain, voice switch, volume, bass, middle, treble and ISF (Infinite Shape Feature) for the overdrive channel; then global reverb and master volume levels. The ISF, also found on the HT-5, alters the way the tone stack responds, especially in the midrange. Turn it all the way left and you’ll get ‘USA’ tones. A full right turn gives you ‘UK’ sounds. Around the back are the external speaker jacks; an emulated output; reverb dark (out) or light (in) switch; effects loop return and send with a handy level (+4 dbV, -10 dbV) switch for tailoring the response to pedals or rack units; and the footswitch jack for toggling channel and reverb.

The clean channel is great with single coils – experiment with the Voice control and reverb type for either a twangy, punchy tone or a fatter, throatier one. Lots of jangle and zing. Higher volume levels bring out a cool overdriven grind, but nothing quite approaching actual distortion. A little more honk can be achieved with the voice switch, which fattens things up nicely for a little extra UK-style power. As for the Overdrive channel, it excels at both rhythm and lead tones, especially within the blues and rock arenas. At full gain and with all tone controls somewhere in the ‘halfway’ range the sound reminded me of Paul Gilbert’s ‘Silence Followed By A Deafening Roar’ tone. Certain metal voices can be achieved – up to Metallica’s Black album tones if you have high-output pickups – but if you need ultra high gain for any style that is suffixed by the term ‘core’ you might want to try a clean boost pedal to push the preamp valves harder. Oh also, I found a great Flying In A Blue Dream-era Satch tone by turning the ISF all the way to the ‘UK’ end, reducing the treble and leaving the midrange at about 5. Gain was at 10 with the voice switch in the out position for the thickest midrange.

There are many players who would dig this amp. Country spank, bluesy grit, rock crunch, shred scream and even fusion tactility are all in here. In an ideal world there’d be a third channel so you could have clean, rhythm and lead channels all in one, but even as-is it works – especially if you follow the Stevie Ray method of riding the gain from the guitar’s volume pot.

Today I trudged along for my very first NAMM and I think it’s safe to say my mind was utterly and stupefyingly blown. Below I’ll list some of my gear highlights, but first, here were a few incredibly cool things that happened today:

Geekboy alert: I saw both Michael Molenda and Brad Tolinski, two journalistic heroes of mine. Hopefully tomorrow I’ll work up the guts to say hello to them!

I had my photo taken with Nuno Bettencourt!

I met probably the most friendly guy on earth, Vernon Reid. Seriously, I’ve heard stories about what a lovely guy he is and they’re all totally true. I just wanna hug him!

I met Blake from the What’s That Dude Play website – awesome dude.

Finally met Pauline France in person. You may remember her from the awesome King of the Blues coverage she provided recently.

I interviewed Joe Knaggs, formerly of Paul Reed Smith and now with his own company, Knaggs. Can’t wait to get the interview transcribed and on the site – he was a very cool guy with lots of interesting stuff to say.

I met Brandon from Jim Dunlop, who has been great in supporting I Heart Guitar with info.

Checking out the new Martin gear. Look for a report soon.

Now for my day at NAMM. Apologies for the fuzzy iPhone shots – I took a camera but it’s having trouble interfacing with the computer, and I was clever enough to use my phone for some backups.

First off, here’s my view as I walked to NAMM. I literally got butterflies in my tummy like a little kid. 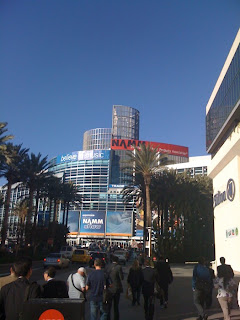 The Ibanez UV77MC multicolour swirl 7-string reissue, painted by the artist who did the originals, Darren Johannsen. 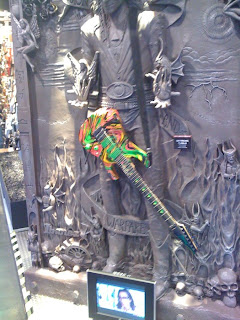 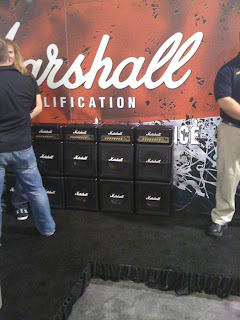 The EVH Wolfgang Special! Yes, after a year of the EVH Wolfgang being totally freaking awesome on its own, it’s now going to be joined (in April) by a flat-topped version. You will also now be able to buy the Wolfgang neck and bridge pickups separately to add to your own guitar.

G&L Rampage Jerry Cantrell signature models! In addition to the cream-coloured one everyone expected, there are a few other models with cool graphics.

Peavey Devin Townsend baritone V 7-string prototype. This axe is being displayed at NAMM to gauge the response, and if things go well it’ll make it to production. Devin’s latest CD, ‘Addicted,’ is so freaking awesome that I hope there’s huge support for the guitar. I checked it out and it was incredible – great attack and sustain.

More info on these items and others in the morning!

Here’s the latest batch of releases from Blackstar Amplification, a company who has always impressed me with their distortion pedals and who also get major I Heart Guitar points for sharing a name with an Yngwie Malmsteen song.

The much anticipated Series One delivers incredible high gain performance with a level of tonal refinement found previously only in the very best boutique and vintage amps.

From the incredible power of the 200W KT88 equipped head to the beautifully crafted 45W combo, each Series One design sets new standards for valve tone and flexibility.

The Series One dual patent design is the result of hundreds of hours of research by one of the most experienced design teams in the business. The built in DPR power reduction system allows reduction to any level down to 10% of the rated power with no loss in tone or valve reliability and the ISF control provides tonal flexibility beyond that of any traditional tone control system. 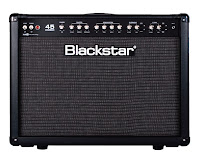 Built on the rock-solid foundation of the classic 100W EL34 power stage, this amplifier sets new standards for clean and crunch tones. Two channels and four footswitchable modes, complete with ISF, include the amazing Super Crunch for the biggest, crunchiest tones yet heard.

The DPR control allows power to be reduced to 10W for studio and small venue work, while a series effects loop and MIDI switching further expand the flexibility of this professionally specified amplifier.

Four selected KT88 power valves form the backbone of this 200W high gain power house and provide unbelievable dynamics and head-room. The DPR control allows the power to be reduced down to 20W for beautiful power amp distortion at a much lower volume level.
Setting new standards in tonal flexibility, the deceptively simple preamp section has four world-beating channels (6 modes) which are further augmented by dual ISF controls. With Series One customisation comes as standard and you will effectively design your own sound.

240W / 16
extension cabinet
Switchable mono / stereo
Finger-jointed birch plywood construction
Heavy gauge wire
Celestion Vintage 30 speakers
Dual Patent Design
ISF (Infinite Shape Feature).
This fully interactive control allows you to infinitely adjust the response of the tone control network between British and American voicings. In this way you can design your own sound and find the sound in your head.

DPR (Dynamic Power Reduction).
The unique DPR system allows you to vary the amplifier output down to 10% of its rated power with no loss in tone or valve reliability. Pure valve output distortion and compression at any volume — a dream come true.

For more information, visit their web site at