You regularly visit www.effectsdatabase.com, right? Bart Provoost’s site is one of the most informative on the web for pedal fans like you and I. He was recently on the ground at Musikmesse in Frankfurt and he filed this report. Some incredible stuff here by the likes of Amsterdam Cream, AMT Electronics, Bogner, Carl Martin, Ciocks, Dr. J, Ego Sonoro, Electro-Harmonix, Greenhouse Effects, GWires, JAM Pedals, Mooer Audio, Nux, Palmer Audio, Paul Landes, Roger Mayer, T-Rex, TC Electronics, Two Notes, and Yerasov. 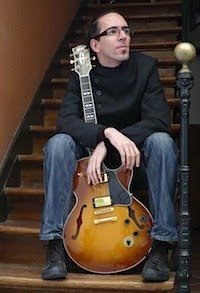 I’ve been embarking on a bit of a jazz discovery kick lately, so it’s perfect that I discover Razl, or Raúl Huelves, at this point in my musical journey. We were originally put in touch by Bryan Beller after I interviewed him, and Razl sent me his amazing CD, Rotonova, to check out. The music is funky, varied, passionate, always interesting, and is packed with emotion and groove. The cover art is also awesome (who doesn’t love robots?), winning the immediate approval of my 2-year-old, which is always a good sign cos he has impeccable taste.

PETER: Why do you play guitar? What was it about the guitar that drew you in?

RAZL: I remember well when I got a guitar in my hands for the first time. I think there was an old classic guitar in the basement of the Pharmacy where my father used to work, it had several cracks and it had almost no strings. One day, my father showed up with that thing when my brother in law happened to be around. He played a couple of Dire Straits and Eric Clapton songs and right there and then he draw a simple guitar method. Then I went to my room and stayed there the whole day practicing. Two days later I called him for more material, since I had already learnt the two songs.

PETER: So where did you go from there? What was your next guitar after the cracked-up classic? And did you take formal lessons?

RAZL: The next guitar after the classic “thing” was a red strat from korea, I don´t know the brand. Few years later I had to sell that guitar to buy a better one, and at that moment I knew how I loved that axe! I took some formal lessons from time to time, but I consider myself as a self-taught guitar player because all that I really know about playing, I learnt it from the music that I listened to the albums that I loved.

PETER: How was the album recorded? It sounds very live and real.

RAZL: Rotonova has tracks that I wrote a really long time ago. Groovin Ants has been in my head for several years but others like Glow Pig just came out while I was recording the album. It¹s quite complicated to gather all musicians at the same time, especially if their names are Mike Keneally or Dean Brown and live a thousand miles away from you. Some of the musicians recorded their part when they were on a tour in Spain or just visiting and others did that in their home studios or studios they liked. In order to keep the live and real touch, I tried not to give many instructions about what each of them had to do, just simple guidelines so they could feel as free as possible and leave room for improvisation, which was the main ‘directive.’

PETER: I like how you start the album with Glow Pig, and finish it with Glow Sheep ­ it’s like a book-end either side of the album. I find that it makes me want to go back to the start and listen again.

RAZL: Well I like that you have noticed that because that’s really what I tried to get. I’ve always liked albums that tell a story, like when you read a book. For many years I¹ve followed symphonic or progressive rock bands and one of the things I liked the most was to ‘read’ the music, so to speak. I just had to listen to the albums from the begging to the end because listening to just one track meant losing the meaning the album had for me. Obviously Rotonova doesn’t have anything to do with those bands musically but I think this perception has somehow remained in my brain and subconsciously the album took that ‘reading’ feel.

PETER: There’s some very cool organ-like guitar playing in Guachi Cola. Are you influenced by a lot of organ players?

RAZL: I’m a fan of the organ sound, I love the way it naturally integrates itself in the sound of a band and it’s especially amazing when it¹s a trio band. I’m a big admirer of music with a big presence of organ, especially funk and blues. I love Medeski, Martin & Wood and their aggressive sound, dirty and elegant at the same time. I¹m actually listening to the last Stanton Moore trio album right now and it’s brilliant. Since I discovered the Rotosphere pedal (that simulates a Leslie amplifier) it has become part of my sound, it gives the guitar a great expression. It also has been one of the main sounds of Charlie Hunter for many years. From my point of view, Charlie took a giant step in guitar expression with his way of playing, extraordinary.

PETER: What was Jungle Karma influenced by? I like the way that the nice ringing notes are balanced out by fast little runs ­ it has a very effective use of space.

RAZL: Jungle Karma is one of the most complex tracks in the album. It also has a complex story since I wrote parts of it a long time ago, while others I just improvised when I recorded the album. It’s influenced by some Herbie Hancock, Pat Metheny and Erik Truffaz bits and pieces, especially when it comes to rhythm. I love what you have mentioned about the use of space, especially in more contemporary tracks when there is a dialog between the main player and the drummer that I particularly admire. It’s really incomparable.

PETER: The album features guest appearances by Bryan Beller and Mike Keneally. What was it like working with them? Are you a long-time Mike Keneally fan?

RAZL: To be honest, I still can’t believe that these incredible musicians have participated in my album. I thought of it at the beginning of the project in a very naive way and then I saw that all of them were delighted to accept the invitation. I obviously liked their professionalism and how easily they understood my suggestions but most of all, I saw that they were all really great guys. In fact, I had been a fan of Mike for many years, he has always been one of my favourite musicians since he has many of the qualities I like in a guitarist: his unique sound, his sense of humour at the guitar and the ability to move in very different styles but always making them his. 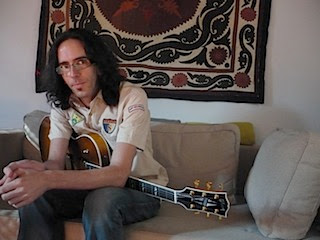 PETER: What are your favourite Keneally songs? Is there a particular song that made you think “I gotta get Mike to play on my album?”

RAZL: Wow! This is a very difficult question because there’s a lot of favorite Keneally songs for me. I think that maybe the album that contains the great majority of favorite Keneally songs is ‘Dancing.’ I love that album from the beginning to the end, and it’s very special for me because it was very hard for me to find it here in Spain. So once I had it in my hands I felt very happy.

RAZL: The one I normally use, both in gigs and in the album, is the Carvin SC90. It has a spectacular thick and percussive sound, and that goes perfectly with my finger-picking style. I also use the Gibson ES 137 Custom a lot, it has a more classic tone and it sounds incredible even if you plug it into a toaster.

PETER: What amplifiers and effects do you use?

RAZL: Through out the years I’ve been reducing my equipment to the minimum. I had a really awful period when I had to set up a thousand pedals, effect processors and stuff like so after the concerts I ended up being really pissed at the end because something had gone wrong. At some point I decided to get rid of all that and I¹m happy now just plugging my Carvin to my Fender Blues Deville 4×10 amplifier, my pedal H&K Rotosphere and my wha-wha Carl Martin.

PETER: How did you develop your style? It’s very complex, yet natural and relaxed.

RAZL: Well, I’m not sure if it’s complex but it’s certainly relaxed. I really like the natural sound and that¹s why I started to leave my pickup behind and play only with my fingers. That has given me the expressive qualities that I was looking for. You find a great deal of nuances playing like that and for some reason it enlarges my vision of the fretboard. I’m still investigating finger-picking possibilities although always turning them into my style.