Some of my favourite recorded chorus sounds are courtesy of one Mr. Eddie Van Halen. Whether using an actual chorus pedal or setting his Eventide harmonizers to a slight pitch-shift, Eddie’s given us a lot of great chorus sounds over the years. And now you can get ’em too with the new MXR EVH5150 Chorus pedal, based on Eddie’s chorus unit from the early 80s (think Diver Down).
What I really like about this pedal is that more than any other chorus pedal on the market, this one is totally optimised for your rig regardless of whether you prefer chorus going into your amp’s preamp or in the effects loop, with three input level and two output level settings to make it play nicely with the rest of your gear. It has mono or stereo output, controls for Tone and Intensity, and a Volume control (not something you usually see on a chorus). It’s interesting to note that there’s no Rate control for the chorus, and as Pete Thorn notes in the video below, this is a little more static like the sounds Eddie got with his harmonizer until you really crank up the intensity.
This one was announced at Summer NAMM a few days ago and isn’t on the market just yet but I can’t wait for it to hit the streets.

Summer NAMM Show (Booth 923), Nashville, TN, June 20, 2016 — The new Waza Craft CE-2W Chorus is a premium analog pedal made exclusively in Japan to proudly honor the 40th anniversary of BOSS effects. Introduced in 1976, the CE-1 Chorus Ensemble was not only the first BOSS effects pedal, but also the world’s first chorus effect in pedal form. Three years later, the CE-2 Chorus brought this original BOSS effect to the iconic compact pedal lineup, where it’s been represented ever since. Celebrating 40 years of BOSS innovation and craftsmanship, the Waza Craft CE-2W brings the sounds of these legendary pedals together in one stompbox with enhanced features. END_OF_DOCUMENT_TOKEN_TO_BE_REPLACED

PRESS RELEASE: Seymour Duncan, a leading manufacturer of pickups and pedals, announces the release of the Catalina™ Dynamic Chorus pedal. The Catalina effects pedal includes a uniquely innovative Dynamic Expression™ mode that allows you to control the depth of the effect through the intensity of your playing. There’s also a threshold control, which allows players to dial in the sensitivity of the Dynamic Expression feature to perfectly match any playing style.

END_OF_DOCUMENT_TOKEN_TO_BE_REPLACED

Aside from being one of the nicest dudes in guitar (read my interview here), John Petrucci is of course an incredible musician with a great pair of ears. He’s been rocking TC Electronic gear for as long as I can remember, and now the company is honouring him with his own signature pedal, the Dreamscape. It’s a combined vibrato, flanger and chorus with effects based on the TonePrints he designed last year for the Corona Chorus, Shaker Vibrato and Vortex Flanger. Here’s the press release:

John Petrucci was one of the first artists to join TC’s revolutionary TonePrint concept. In total, John created 5 personal TonePrints in early 2011 – two for Corona Chorus, two for Shaker Vibrato and one for the Vortex Flanger. John loved having access to all effect parameters so much that he instantly agreed to develop a signature pedal together with TC – one that was based on his own TonePrints. And so The Dreamscape was born.

END_OF_DOCUMENT_TOKEN_TO_BE_REPLACED

Dunlop announces the release of the MXR Analog Chorus.

This all-analog pedal uses bucket-brigade circuitry to create classically lush, liquid textures that you just can’t get with digital circuitry. Rate, Level, and Depth controls, as well as knobs for cutting High and Low frequencies allow ultimate tone control. Like all MXR pedals, the Analog Chorus comes in a heavy-duty housing with durable jacks and switches for a lifetime on the road.

to buy the MXR Analog Chorus from Musician’s Friend.[/geo-out]

Check out the official demo of the MXR Analog Chorus here. For more info, visit jimdunlop.com.

Red Witch pedals hail from the North Island of New Zealand. The company specializes in high quality analog pedals which look as good as they sound, with a very boutique vibe.

I reviewed the Empress chorus/vibrato pedal. The pedal is housed in a diecast aluminum box which has been heavily plated with shiny chrome, and screen printed with slightly art nouveau inspired images. The typeface used to describe the controls looks very gothic and iconic, and Red Witch gets big points in my book for creating a strong brand identity, unlike a lot of smaller pedal makers who seem to just stick a Dymo label on a sardine can and call it finished.

Controls on the Empress include a small switch for selecting vibrato or chorus mode, and another switch for brightness; and knobs for velocity, mix, depth and voice. There’s also an internal slide switch to choose between two different input stages. The unit is preset to the Medusa input stage setting, and the other position provides a little more boost and slightly different tonal response.

Switching is true bypass, and the pedal runs on either a 9 volt battery or an external power supply.

Plugging this beast in, the first thing to catch my attention was a LED which flashed in time with the velocity setting. Nice touch! 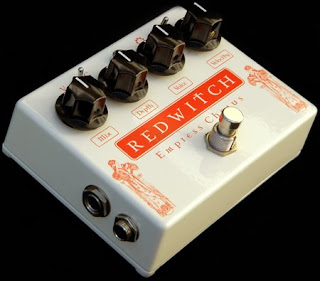 It seems relatively easy for pedal designers to design a chorus pedal which has that slick 80s hi fi sound – you know the one, it’s all over the clean tones on any Def Leppard or Michael Bolton album. But what makes the Empress great is that it nails that classic vintage warbly chorus sound that sounds like it’s a true part of the sound, rather than something that’s being done to the sound.

My favourite setting was running the pedal into the lead channel of my Marshall DSL50 head, with the voice and depth controls on 10 and the velocity and mix controls on 4. With this setting going into a distorted amp tone, the Empress added rich harmonic overtones similar to Eric Clapton’s “Woman Tone” or the sound of a wah pedal half cocked, which seemed to swell up around the note then drop back again.

Backing off the gain and switching to vibrato mode, some great vintage textures were on tap, and cranking everything to 10 in either chorus or vibrato mode created some gloriously over the top wobbly bubble sounds.

This pedal is one of those rare units that is able to inspire you to seek out new sounds and new songs to fully take advantage of all it has to offer. It’s one of the best chorus pedals I’ve seen in a long time.

Here’s a great video demo of the Empress by ProGuitarShop. (By the way, I’ve bought quite a few pedals from ProGuitarShop – great service, and their demo videos are the best I’ve seen).