For the last few days I’ve been reading about Dean Zelinsky’s new Sidekick pickup. Zelinsky says “The SideKick Pickup is the World’s first pickup that is a true Humbucker and switches to an authentic Single-Coil – all in a single pickup. With SideKick technology, switching from humbucker to single-coil, the pickups actually match volume. There is virtually no volume drop-off as in conventional Humbucker coil-tapping or splitting.” END_OF_DOCUMENT_TOKEN_TO_BE_REPLACED

No, it’s got nothing to do with a Dragon Ball Z/Star Wars crossover. DBZ Guitars, the new company formed by Dean Zelinsky, has officially launched their ‘Dark Side of Dean’ range. These guitars look pretty savage, in the nicest possible way.

DBZ Guitars is pleased to announce a new series of distinctive metal guitars, “The Dark Side of Dean.” This line is a new offering of uniquely carved masterpieces straight from the darkest depths of legendary guitar builder Dean B. Zelinsky’s mind. “The Dark Side series is designed for the sophisticated player, who is searching for the ultimate ‘over the top’ metal instrument,” says the CEO and DBZ Guitars founder.

Zelinsky is no stranger to metal. His guitar creations are played, and have been played, by metal & rock royalty on stages across the world for decades. Armed with 30 years of knowledge and experience, DBZ has created a guitar line like no other specifically for his fans and fans of the genre. “Great tone, feel, and incredible playability have always been the bottom line. But now, by embracing advances in woodworking technology, we can create anything we can imagine. ‘The Dark Side’ line is no exception. We’ve pushed the boundaries to create sculpted masterpieces with more tone, feel, and magic than anything I’ve ever created,” he says.

The “Dark Side of Dean” consists of three unique and darkly ornate models:

DBZ Bird of Prey The Bird of Prey is a carved masterpiece that unites form with function. It’s available in a variety of custom colors and graphics with a highly contoured body. Bird of Prey comes standard with EMG active humbuckers providing all the intensity and depth needed to compliment it’s intense design. The Bird of Prey’s easy access 24-fret neck gives players the ability to tear up the fretboard in style while lending their music a visual punch to the gut.

DBZ Venom The Venom is a deeply visceral V-style guitar. Like the Bird of Prey, Zelinsky uses modern technology not only as a method for precision and efficiency but as a means to realize the menacing sculpture that lies beneath the tone wood. The Venom comes loaded with EMG pickups, original Floyd Rose tremolo, and show-stopping graphic options.

DBZ Halcyon The Halcyon is a radical re-imagining of a classic style. It is a sleek, double cutaway guitar that balances classic functionality with modern metal sensibilities. Like the Bird of Prey and The Venom, the Halcyon is loaded to the hilt with EMG pickups, original Floyd Rose Tremolo, easy 24-fret access, and set-neck construction. It’s available in high impact colors and radical off-the-hook graphics, including the Vertigo and the Death Dealer.

For a full list of specs, colors and graphic options, please visit www.dbzguitars.com

All Dark Side Guitars are also available as USA Custom models. 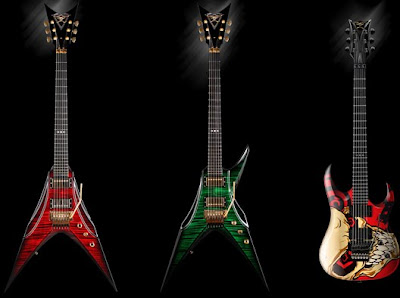 Whoa. Dean Zelinsky has officially launched his new brand, DBZ Guitars, with a new website ahead of the coming NAMM trade show. Check out that Cavallo V. I mean, it’s obviously a 3D computer rendering, but imagine what that’ll look like in person, with all that carved wood and flamed-as-all-get-out maple.

Highlights of the new DBZ line are the Cavallo V, with lines and carves clearly inspired by Ferrari, the DBZ Croc Skin Bolero, the first guitar ever to obtain the look and feel of crocodile skin, and the Imperial, with a super-thin body design which Zelinsky claims to be an “acoustically perfect” solid body electric guitar.

DBZGuitars.com will link to an equally important DBZ site, “The Dark Side of Dean,” which exclusively caters to the heavy metal fans who value Zelinsky’s craftsmanship, and will be debuting 21 new guitar designs. Zelinsky stated that this will be an exclusive club. The Dark Side of Dean will be password protected, and only die-hard Dean Zelinsky fans will be admitted. Clues to unlock the mystery of the Dark Side will be located on the DBZGuitars.com site as well as various Internet sites. The Dark Side will also host its own DBZ Dark Side guitars forum.

Zelinsky, along with co-founder Jeff Diamant, launched DBZ Guitars August 26, 2008. Diamant, who founded Diamond Amplification, and Zelinsky will be hosting the DBZ/Diamond Booth #3290, Hall D at the NAMM show in Anaheim, California on January 15, 2009.