The Gibson Explorer was ahead of its time when it was released in the 50s, and still seemed like a bit a quirky anachronism in the 70s. But in the 80s it found itself at the centre of a revolution in guitar: thrash. This highly technical, highly aggressive new form of music required a guitar that could have plenty of punch, was playable, and looked badass. Certain players took the Explorer and popped a set of EMG pickups in it, and went on to create history. The 1984 Explorer EX pays tribute to the meeting of Explorer and EMG that helped to define the future of heavy music.

Click here to buy an Epiphone 1984 Explorer EX in Ebony

or here to get one in Alpine White.

Or click here to see Gibson Explorers on eBay.

END_OF_DOCUMENT_TOKEN_TO_BE_REPLACED

Gibson Guitar, the world’s premier musical instrument company and leader in music technology announced the anticipated release of the 7-String Gibson Explorer as part of their Rocktober Celebration.

The Gibson Explorer was the most radical electric guitar ever unleashed upon the unsuspecting music world of 1958. Way ahead of its time, it failed to gain a foothold among the generally conservative players of the day, but became a major rock icon by the late ’60s, and has been taken up by countless guitar heroes over the course of the intervening decades such as U2’s the Edge, ZZ Top’s Billy Gibbons and Foo Fighters’ Dave Grohl.

Fast forward to the 21st century, and the 7-String has become the choice of an increasing number of thrash and nu-metal players, who seek eviscerating tones with the gut-rumbling potential of an added low-B string. Enter Gibson’s 7-String Explorer, a natural marriage of rock’s most radical shape and the specs demanded by the most adventurous 7-string players on the music scene today. This new addition to the line for Gibson’s “Rocktober” celebrations combines the proven tonal advantages of mahogany neck and body with the scorching performance of EMG pickups, all the solid playability of Gibson construction and hardware, and a black gloss Ebony nitrocellulose finish, resulting in an unrivalled package for the heavy rocker.

The body of each 7-String Gibson Explorer is crafted from solid mahogany, a legendary tone wood has yielded some of the most classic tones in the history of rock. The 7-String Gibson Explorer follows the classic lines of the original Explorer, with its radical “lightning bolt” shape and distinctive slanted headstock. In addition to creating a revolutionary look, the Explorer body offers superb upper-fret access due to its high neck/body joint, and contributes to a unique resonance and tonal response.

The neck of the 7-String Gibson Explorer is constructed from solid mahogany, cut using the superior orientation for improved strength and resonance, and glued to the body at a 3.5-degree angle (pitch). Mahogany is the most traditional wood for Gibson electric guitar necks, and offers an outstanding combination of strength and resonance. It makes an excellent sonic and visual partner to the solid mahogany body. Gibson’s traditional truss rod, is highly responsive to the individual adjustments which you can make to personalize and optimize string action and sustain. The 7-String Gibson Explorer carries the classic headstock of the original Explorer, but with seven Grover Mini Rotomatic tuners on its upper side. These tuners are recognized as one of the finest in the industry, and represent a high-performance option on any guitar. The headstock of the 7-String Explorer is adorned with a simple Gibson logo, silkscreened in silver at its furthest extent. 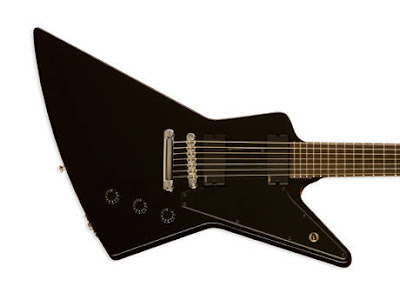 A pair of EMG active pickups, long popular with thrash, nu-metal, and heavy rock guitarists, equip the 7-String Explorer for serious action on delivery. A high-output EMG 81-7 in the bridge position and a smoother EMG 707 in the neck position ensure an excellent balance between pickups, and deliver a wide range of contemporary tones, from a warm, singing, vocal neck tone to a punchy, snarly and aggressive bridge tone. The 9V battery required to power them yields upwards of 3,000 hours of use, so battery changes are infrequent. These pickups yield outstanding clarity and an unusually broad frequency range, with an extremely dynamic response throughout the spectrum. They excel at high-gain rock styles, but also purr beautifully when applied to smokier clean tones. The 7-String Gibson Explorer uses an individual volume control for each pickup, for a smooth, natural volume roll-off and a single tone control that is shared between pickups.

In 1954, Gibson revolutionized guitar hardware when it debuted the Tune-o-matic bridge, setting a standard for simplicity and functionality that has never been bettered. Included on the 7-String Explorer, where it has been updated for the 7-string requirements, the tune-o-matic provides a firm seating for the strings, allowing the player to adjust and fine-tune the intonation and string height in a matter of minutes. It also yields excellent coupling between strings and body, maximizing resonance, tone, and sustain. Every Tune-o-matic bridge is combined with a separate “stopbar” tailpiece, which is essentially a modified version of the earlier wraparound bridge that’s designed to further enhance the connection between the strings and the body. The 7-String Explorer’s stopbar tailpiece is made from Zamac then plated with chrome, and had been updated to load seven strings. The guitar is fitted with genuine Gibson strings, sizes .010 – .059.