“Reading the news about what’s been happening in Australia has been heartbreaking, It’s hard to even comprehend the scale of damage; hopefully this small contribution on our part can make a difference somewhere.”

So all proceeds from their show at O2 Apollo in Manchester in June 9 will benefit relief funds WIRES and CFS Foundation.

If you’ve been following this blog for a while you’re probably aware of what a huge Faith No More geek I am, so I was super excited to get to photograph the band at Soundwave yesterday (and to interview Billy Gould today for Australian Guitar magazine). Here are some of my shots. Faith No More’s new album Sol Invictus is released on May 19.

END_OF_DOCUMENT_TOKEN_TO_BE_REPLACED

WOO! As a huge Faith No More fan this news has totally made my day/week/month/year/decade. Faith No More’s Billy Gould has confirmed to Rolling Stone that the band is making a new album for release in 2015. In fact, he says they’re pretty far into the process already, and it’ll be released on the band’s own label, Reclamation Records, which will be distributed via vocalist Mike Patton’s Ipecac Recordings. The first single from the album will be a studio version of the song “Motherfucker” (which they debuted at London’s Hyde Park in July), which will be released on a seven-inch and limited to 5,000 copies as part of Record Store Day’s Black Friday (November 28). END_OF_DOCUMENT_TOKEN_TO_BE_REPLACED

The existence of Mike Patton’s Mondo Cane should be no surprise to anyone. Even Patton’s most commercial musical endeavour – Faith No More – was pretty damn uncommercial, a few big hits notwithstanding. Mr. Bungle were always the musical equivalent of a sophisticated sugar high, Fantomas is like soundtrack music for a fever dream, and there are plenty of other non-obvious, non-pop entries dotted throughout Patton’s musical resume. Yet still Mondo Cane stands out as one of his most surprising yet most ‘that totally makes sense’ musical endeavours: sweeping versions of 1950s and 60s Italian pop music, rendered with respect and creativity rather than as a joke. Faith No More fans might have seen hints to this in that band’s occasional Burt Bacharach covers or some of Bungle’s more leisurely moments on California, but Mondo Cane is the fully-realised expression of this side of Patton’s musical personality. Fans in Melbourne, Sydney and Brisbane will be able to experience the splendour first-hand when Mike Patton’s Mondo Cane performs at the Harvest Festival and at a sideshow in Melbourne this month.

What are the logistics of pulling something like this together?

Well, it’s a lot of phases, a lot of steps. To go back to the beginning it’s selecting the songs. In the beginning I probably had about 150 tunes that I was in love with and thought that maybe I could do some justice to. Then you whittle them down, whittle them down and keep whittling them down. Then you want variety, you want this composer and that composer, and you try to paint the kind of brush strokes that you envision. So you have to eliminate certain things that are fantastic but could maybe be saved for later or something like that. And once you decide that, it’s ‘Okay… who am I gonna get to help me?’ And I was very, very lucky to find Daniele Luppi, who has since become a very, very dear friend. He helped me transcribe all of this stuff. I had the arrangements in my head how I wanted to change each tune and the sort of instrumentation I wanted, and he helped me put it down on paper and make it intelligible to the rest of the world. END_OF_DOCUMENT_TOKEN_TO_BE_REPLACED

Korn are one of the few bands of the Nu Metal era to have endured. Not only does their original breakthrough material still hold up despite the decade and a half of imitators, they also manage to maintain a sense of vitality in their newer material. Just look at last year’s Korn III: Remember Who You Are. It was a dirty, raw, powerful, vital album at a time when bands often become complacent. But complacency isn’t in Korn’s vocabulary. Their latest, The Path Of Totality, finds them pairing up with various dubstep and electronica producers to put a heavily neo-industrial spin on their established bottom-heavy rhythmic drive. But The Path Of Totality isn’t the only new release that Korn guitarist James ‘Munky’ Shaffer is involved in. He recently – finally – released the debut self-titled album by his long-planned solo project, Fear and the Nervous System, a band which features Faith No More bass player Billy Gould, drummer Brooks Wackerman, and Repeater vocalist Steve Krolikowski.

How did the collaborations on The Path Of Totality happen? Did you work together in the studio? Did you send off recorded parts?

It was kind of mixed up. We started out with Skrillex and we worked in the studio with him on the first track, which was ‘Get Up.'” So we were actually working with him in person. And also with Downlink and Excision. Noisia, those guys are from the Netherlands so we just send tracks through the air. They sent them back and Jonathan (Davis, vocals) was in communication with them. So it was kinda different with each artist and producer.

It must have been a cool challenge to figure out exactly where the guitar would fit amongst all the other stuff going on.

I mean, on a lot of the tracks it seemed really like ‘Where am I gonna put the guitar? Where is it gonna fit?’ And it was challenging for me. Rhythmically it was really kinda busy and I was trying to find the right space and the right notes. It’s like a boxing match – you bob and weave to sort of get your punch in there.

END_OF_DOCUMENT_TOKEN_TO_BE_REPLACED

We all know about djent by now – the metal genre named after a specific guitar tone that sounds like ‘djent djent djent’ – but you need only to look at the wah wah pedal to know that guitarists have long been hip to the joys of onomatopoeia. We also talk about ‘jangle,’ ‘crunch,’ ‘chug’ and ‘chunk,’ all words that sound like the things they’re describing. But I think we should go further. I think there should be an onomatopoeia for every sound a guitar makes. So here are a few suggestions.

“Quoar”
It’s the sound of a wah wah being used to hover loosely around a specific frequency rather than rocked back and forth to its extremes. It’s almost impossible to make this kind of sound without also making the appropriate mouth shapes. Joe Satriani is the master of this. Check out the video for “Summer Song” for proof, especially throughout the solo that starts at 1:55. [geo-out country=”Australia” note=””](Here’s

“Kiww”
The pickslide deserves its own name. Sure, ‘pickslide’ is how you achieve the sound, but it’s not what the sound is. If that was how we were going to name guitar stuff, you might as well call the wah wah the ‘foot move’ pedal, or call fingertapping …finger …tapping. Oh. Okay, well I guess we need to come up with a new name for fingertapping too. In the meantime, there are some great kiwws in “Rocket” by Def Leppard.

“Goong”
A downtuned open string, hit at a strategic time, and maybe picked a little too hard or with too light a string gauge for the tuning, so the note kind of drifts into tune after starting a little bit sharp. LIke at :05 in Mastodon’s “Oblivion.” “Dude, that riff’s kinda killer but it’d be really killer if you threw in a goong.

“Wakka,” “Wikka,” “Chikka,” “Kooka”
You can achieve a pretty wide range of sounds from a muted clean guitar and a wah wah pedal, but most of them hinge on a “Ka” sound at the end. You can hear a whole smorgasbord of them, a grand buffet of muted clean wah work, in Trey Spruance’s playing during the intro of Faith No More’s “Evidence.” 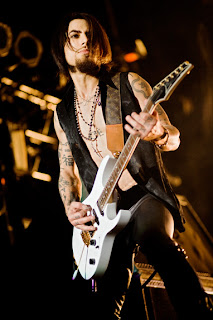 Here’s the first round of bands announced for Australia’s Soundwave festival. Lots of great bands there but my personal highlights are Faith No More, Meshuggah, Trivium, and of course Jane’s Addiction. I’m especially happy about Jane’s, because this means I can remove them from my Enemies List, which they were placed on when they cancelled their recent Australian tour. The other good thing about them being booked for Soundwave is that it will hopefully force them to stay together until March.

Watch this space for information about sideshows. If there are any Faith No More sideshows you bet yer ass I’ll be there. I saw them at Melbourne’s Festival Hall in 1997 on the Album of the Year tour and I never thought I’d get to see them again.

“In answer to your questions of shows outside the EU, especially from Brazil and Australia, yes, we are thinking of coming there.”

If you’re not already following me on Twitter, here I am. I use my Twitter feed to publish links to each new blog story, but I also use it to discuss music-related stuff, link to stories from around the web, and sometimes to ask for question submissions when I’m interviewing someone. And of course I also use it for the same random observations as everyone else.