Just got this press release from my mates over at Riot Entertainment, who are releasing the new album by Fozzy! Hells yeah! \m/

To celebrate the announcement of the release date Fozzy have launched the first single ‘Martyr No More’ to the public via youtube. The song also features a guest solo from Annihilator guitarist Jeff Waters!

To listen in, press play below or just CLICK HERE

The band has also revealed the artwork which was designed by George Lenox.
More on George can be found here 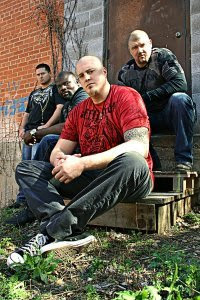 My buddies over at Riot recently sent me this press release:

There is a new name in Heavy Metal! Free Reign featuring the Dallas Cowboy’s # 75 Marc Colombo, # 71 Cory Procter and # 70 Leonard Davis along with local guitar virtuoso Justin Chapman have signed a world wide deal with Australia’s Riot Entertainment. Their upcoming debut EP is set for release in the fall.

Free Reign has been branded ‘Heavier than Metal’ for their intense musical style as well as their intimidating stage presence. They bring something unique to this powerful genre.
“This is an amazing opportunity for Riot and to further establish our name internationally,” said Riot Owner / CEO John Howarth. “Free Reign is a band with massive potential. There has been an enormous buzz surrounding them since they appeared on the scene a few months ago. Free Reign has already been flooded with endorsements. Their marketing potential is limitless. These guys are already huge sports stars, but they have shown they have the talent to diversify. I am positive that Metal fans will embrace Free Reign and see them take it to the next level. These are exciting times for Riot and we are excited to see what the future holds. When the opportunity arose to work with Free Reign I jumped to it! This is something that has never been done before and this band is a long term project. It’s also been great working with John Gomez of TQ Management putting this deal to bed”.

“The members of Free Reign and myself are equally excited to be working with John Howarth and his team at Riot Entertainment” said Free Reign Manager John Gomez. “Riot has a great track record and they work hard for their Artists, we all look forward to a bright future together and are honoured to call Riot our new home.”

“I would love to see a double bill with these bands, imagine that! No security needed!” suggested John Howarth. “I know that would be one hell of a gig. Imagine WWE, NFL, Fozzy and Free Reign fans all under the one roof; only the strong would survive!”
Free Reign play their last gig before the NFL Season on Saturday 27TH June at the House of Blues in Dallas!

I Heart Guitar news – sifting through the internets so you don’t have to.

Rare Mike Keneally albums available again
Mike Keneally has made available via download three long out-of-print titles: Sluggo! (probably my personal favourite), The Mistakes (an amazing collaboration between Keneally, Prairie Prince, Andy West and Henry Kaiser that I had to pay fifty bucks for on eBay), and Half Alive In Hollywood, which I’m going to buy the hell out of come payday.

In his most recent email newsletter, Mike says: “It has been our plan to do expanded, remastered special editions of these albums since we started the reissue campaign with hat. and Boil That Dust Speck, but with all of our current operating capital going towards the manufacture of the three upcoming Scambot CDs, we couldn’t wait any longer to make these archive releases available. These downloads feature the albums precisely as they were originally issued, including all artwork lovingly reproduced, and all feature new updated liner notes by moi (which is French for Mike Keneally). Available in both FLAC and mp3 format for the same low price. Will we ever reissue these albums on CD? We don’t know? (Ask us when Scambot:Three is done.) In the meantime, we feed a music-hungry world as best we can.”
To download the albums, go to http://store.moosemart.com
Source: Mike Keneally
Link: www.keneally.com

Riot! signs Fozzy
Riot! Entertainment, the crew who hooked me up with my Derek Sherinian interview, recently signed wrestler Chris Jericho’s metal band Fozzy (with Stuck Mojo guitarist Chris Ward) to a worldwide deal for their forthcoming album, ‘Chasing The Grail.’ This is a huge move for Riot! and is sure to mean lots of label support and promotion for Fozzy. Chris Jericho said of the partnership, “I’m very excited to know that the new Fozzy record is going to be released by John Howarth and Riot. Riot was by far the biggest supporter of Fozzy’s last album ‘All That Remains” and did everything they could to spread the Fozzpel not only across Australia, but around the world as well. As a result ATR was by far our most successful album to date. To make this partnership even more exciting is the fact that we have written the absolute best album that we have ever done. This album will see Fozzy reaching new heights and breaking down more barriers to show all fans of heavy rock and heavy metal exactly who we are as a band. I guarantee that all of our fans will agree and be blown away and that all of our haters will hide their faces in shock when they realize that they were wrong about this band. I’m so stoked to unleash these tunes upon the world and just as stoked to know that it will be the people at Riot who will be making it possible! 2009 is the year of the Fozz!”
Source: Riot!
Link: http://www.riotact.com.au

Manny’s in New York closes
Dammit, I always dreamed of going to Manny’s in New York when I was a kid, after reading about it guitar magazines and books and stuff. Now it seems that unless someone throws a bunch of cash at me, I’ve missed my chance. Manny’s is shutting its doors in May.
Source: Premier Guitar
Link: http://www.premierguitar.com/Magazine/Issue/Daily/News/Legendary_Mannys_Music_to_Close.aspx

Trent Reznor disses Chris Cornell on Twitter
Are you following Nine Inch Nails’ Trent Reznor on Twitter? www.twitter.com/trent_reznor. He posted this yesterday: “You know that feeling you get when somebody embarrasses themselves so badly YOU feel uncomfortable? Heard Chris Cornell’s record? Jesus.”
Oooh, burn.
Source: Music Radar
Link: http://www.musicradar.com/news/guitars/trent-reznor-disses-chris-cornell-on-twitter-200045

Singer search for my band
And finally, in other news, my band is looking for a singer. The music is influenced by Alice In Chains, Extreme, Devin Townsend, Living Colour, Primus, Joe Satriani, Frank Zappa and Mike Keneally, as well as a whole bunch of other things. I’ll post an audio sample over the weekend to give you an idea of the style, but if you know of anyone in the Melbourne, Australia area who has great stage presence and can sing their ass off, email me at iheartguitarblog@gmail.com