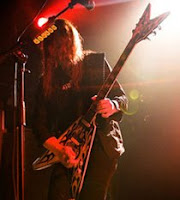 Arch Enemy/Carcass guitarist Mike Amott has signed with Dean Guitars, after a long-running endorsement with ESP which resulted in the hella sexy Ninja line of Vs.