Rotosound has three Limited Edition versions of their legendary Vintage Fuzz Pedal to give away. To be in with a chance of winning all you need to do is visit the Rotosound Facebook page and ‘like’ it. When the ‘likes’ reach ten thousand three lucky winners will be chosen at random from all the new ones. END_OF_DOCUMENT_TOKEN_TO_BE_REPLACED

Britain’s premier guitar string manufacturer Rotosound has developed, together with a selection of their metal guitarist endorsees, a new range of signature strings. They can now announce the launch of signature string sets for guitarists Michael Amott (Arch Enemy, Carcass), Paul Allender (Cradle Of Filth) and Mikey Demus (Skindred).

Michael Amott is known for his involvement with a number of death metal/hard rock bands — namely Arch Enemy, Spiritual Beggars and Carcass. These signature strings, influenced by Michael’s own personal style and are excellent for achieving wide vibrato, memorable melodic lead lines and furious sledgehammer riffs. Amott said, “They have great tone, they stay in tune, they don’t break easily. What more do you want? I rely on my MA11 Rotosound strings every night on stage and in the recording studios. Rotosound shreds.”

END_OF_DOCUMENT_TOKEN_TO_BE_REPLACED

I’m currently rocking Rotosound strings on almost all of my 6-string guitars, and I really like how lively the tone is. I’m also a bit of a tightass, so Rotosound’s new Double Decker sets, which save you up to 20% by packaging two sets together, has gotta be a good thing. 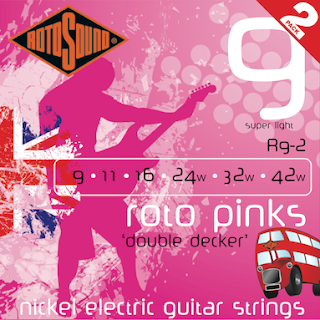 Rotos are used by many of the world’s top artists and range from Guthrie Govan to Franz Ferdinand; they are the first choice guitar strings for amateurs and professionals alike. With a brilliance in tone, Rotos are made using the finest quality nickel on steel and manufactured with the strictest of quality control to ensure consistency, strength and durability.

The new double decker packs are coded R9-2 and R10-2 and reduce packaging by approx 70% compared to buying two separate packs. They will be available in the shops from March 2010.

For further information on the new sets and other Rotosound products see http://www.rotosound.com/

This press release from Rotosound found its way to me today. To be honest I’ve never really settled on a string brand – I’ve used them all over the years and continue to do so – but I actually have a 10 pack of Rotosounds in my music room that I’m currently using on all my 9-42 gauge guitars and I’m very happy with them. Well, when I say 10-pack, it’s down to about 6 now, since 4 sets have found their way onto guitars. So Kudos to Rotosound for stumbling across my blog without knowing I’m a current Rotosound user!

I’m also posting this because articles about British bands make me feel like I’m writing for Guitarist, one of my favourite magazines. Hehe.

Rotosound’s strings are played by some of the greatest names in the music world. Their reputation continues to grow as they proudly announce some of the cream of Britain’s best bands are now using their strings.

The West London band, White Lies, who won this years MOJO Breakthrough award has just been nominated for best new band in the forthcoming Q awards (to be announced 26th Oct). Guitarist, Harry McVeigh is using Rotosound R10’s and bass player Charles Cave is using Rotosound RB45’s. The band’s debut album To Lose My Life… went in the charts at number one in January 2009 and they are currently supporting Kings of Leon on their US arena tour. The band has announced a headline UK tour November 2009, which includes two shows at the London Brixton Academy.

New British metal band You Me At Six band members are also using Rotosound strings. They were nominated for “Best British Band” at the 2008 and 2009 Kerrang! Awards and have been featured on two front covers of Kerrang! already this year. Both lead Guitarist Chris Miller and Rhythm guitarist Mex Helyer are using RH10 electric strings and JK11 acoustic strings and bass player Matt Barnes is using RS66LD bass strings.

The Scottish rock band Twin Atlantic,from Glasgow, has also been on the road using Rotosound. The band played top festivals over the summer including Download Festival, Guilfest, T in the Park, Sonisphere and Reading. They also supported Taking Back Sunday and will play a full headlining UK tour this month following the release of their new album Vivarium in September. Guitarists Sam McTrusty and Barry McKenna are using Rotosound Electric strings RH10 and R12 and bass player Ross McNae uses RS66LD’s

Wakefield band, The Cribs, described by Q magazine as “The biggest cult band in the UK”, has been on the scene longer. They have just released their fourth studio album Ignore the Ignorant, which charted in the top 10 in September 2009.The brothers Gary and Ryan Jarman were joined last year by the ex-The Smiths guitarist Johnny Marr. Ryan Jarman uses Rotosound R10’s and bass player Gary John Jarman uses Rotosound RS66LD’s

For further information on Rotosound endorsee’s and their products see http://www.rotosound.com/

About Rotosound
Rotosound is a pioneering force in string manufacturing and celebrated their fiftieth anniversary last year. Their world famous music strings have been the first choice for some of the greatest musicians in the history of music and include Jimi Hendrix, Led Zeppelin, Rush, Iron Maiden, Pink Floyd and the cream of more recent bands such as Franz Ferdinand and Oasis. They continue to endorsee an ever increasing list of the most respected, innovative and professional musicians, as well as being used by millions of satisfied customers around the planet.

Rotosound will be exhibiting at this year’s Mansons Guitar Show which takes place on the 24th & 25th October at the Riverside Leisure Centre, Exeter, UK

They are offering a * FREE SET OF STRINGS to the first 60 guitarists and the first 20 bass players who present the special show voucher available to download from their website (see latest news section on http://www.rotosound.com/ ). There will also be special deals on accessories, cables, straps, plectrums from their stand.

On display will be the much talked about Nexus coated guitar and bass strings where visitors are welcome to come and try the new strings. It will be also the first unveiling of a new product, details to be announced separately on the Rotosound website.

Rotosound staff will be on hand to answer any questions and look forward to welcoming you on their stand number 10.