You may remember Scott Ian of Anthrax discussing his badass Jackson King V in our interview recently. This incredible guitar is now available to the public in two versions, including a USA-built behemoth. Jackson has also announced new signature models for Misha Mansoor, Phil Collen, Mark Morton and Dave Davidson. END_OF_DOCUMENT_TOKEN_TO_BE_REPLACED

Anthrax has done what few bands get to do: put out one of the best, most memorable, most crushing albums of their career a good three and a half decades in. For All Kings is everything you loved about Anthrax, amplified and brutalized. Scott Ian’s rhythm guitar is as aggressive and tight as ever and his tone is massive. I caught up with him to talk about the record and how he gets that sound. END_OF_DOCUMENT_TOKEN_TO_BE_REPLACED

PRESS RELEASE: The latest FREE digital instalment of Guitar Interactive is now available, featuring its usual high dosage of HD video guitar & gear reviews, in-depth interviews, tech sessions, comps and more. For over 40 years Martin Barre handled the electric guitar duties of prog-rock doyens, Jethro Tull. In Gi30 we invited the guitar veteran into our East London based studio to record two exclusive performances and wide ranging interview. As one of the founding forefathers of Thrash metal, Scott Ian has dined at the table of Metal’s Big 4 since the formation of Anthrax in the early eighties. We meet the man with deadliest downstroke in the business.

END_OF_DOCUMENT_TOKEN_TO_BE_REPLACED

Have you seen what MONO is up to? They offer a range of environmentally, zoologically and aesthetically friendly cases for we guitarists, as well as plenty of other items too – wallets, laptop sleeves, iPad sleeves, backpacks, pedalboard cases, DJ storage stuff… The company has a clear and identifiable design style  too, which gives their products a lot of character. Y’know how products by companies like Apple and Fender always feel ‘Apple-y’ or ‘Fendery’ yet retain their individuality as an item? That. I had a chat with MONO founder Daniel Kushner about the company’s philosophy, product offering and jam-friendly company culture.

How did Mono begin?

MONO was born out of 3 colliding factors: 1. My desire to build a design-driven company, 2. My desire to reconnect with my musical side, and 3. My frustration at the time with the state of soft goods in the music industry. I felt I could really make a difference in the industry designing pro level products for my favorite activity – going to play music. “Go Play” became my mantra, and continues to be our mantra!

END_OF_DOCUMENT_TOKEN_TO_BE_REPLACED

Pearl Aday and her band play kickass high-energy, slightly dark-tinged rock. It’s no surprise that the band rocks so hard. In addition to Pearl’s impressive resume and family history (for instance, she’s toured as a backing vocalist for Motley Crue as well as for her dad Meat Loaf), the band Pearl consists of the members of Mother Superior – who for a while were the new Rollins Band – and her husband Scott Ian of Anthrax. Being surrounded by rock her whole life, Pearl kicks off her debut album – Little Immaculate White Fox – with a raging anthem called Rock Child which immediately shatters any idea that rock is anything but in her blood.

“It’s just a rock song, high energy rock and roll. It’s pretty straight forward,” Pearl says. “The lyrics are about how I guess I am a, y’know, rock child. My dad’s a rock singer, and the lyrics are pretty autobiographical. When I was little my mom worked in a recording studio, and an open guitar place was a really good place for a baby to sleep if you put in a blanket and a pillow. So I actually did sleep in a guitar case. We just felt it was a fun song and a really good opener to kickstart the album.” Pearl could be forgiven for skirting the issue and not writing a song about it, but what would be the point? “I’m not ashamed of it,” she says. “I’m proud of where I come from. It’s part of who I am and what I do, so why not celebrate it?”

END_OF_DOCUMENT_TOKEN_TO_BE_REPLACED

The Charvel Surfcaster debuted in 1992 and at the time it was a bit of an anachronism. A little too early to cash in on the grunge-inspired attraction to vintage designs, and a little too late for the kind of clean-toned, ‘The Cure’ type tones it excelled at, the Surfcaster’s most notable user was probably Anthrax’s Scott Ian, who used one for the clean tones in the track ‘Black Lodge’ from The Sound Of White Noise and was pictured with one on the cover of a 1993 edition of Guitar World. These semi-hollow, lipstick pickup-toting axes never quite got the respect they deserved, although those who did buy them evidently loved them because it’s quite rare to see them on the used market. When you do find them, expect to pay around USD$1,000. The Surfcaster design lived on until 2005, by which time it had been shifted to sister company Jackson, with production moved from Japan to India. Personally I’d love to see Surfcasters return to regular production under Charvel.

I love these retro designs. The SGV series was probably a bit to wild for most players, with its slight upside-down melted Rickenbacker bass look and unconventional whammy bridge which worked great when you gave it a little TLC but was maybe a little too high maintenance for some. The SGV-800 (and the more upscale SGV-1200) had a pair of P90-style single coils which were fat and growly. The SGV-700 (and lower-priced little buddy the SGV-300) rocked a smaller single coil and a very unique humbucker. The retro/modern look wasn’t lost on Meegs from Coal Chamber, who used a black custom shop SGV with twin humbuckers, a fixed bridge, drop-tuning lever on the low E string, and number-shaped fretboard position markers, Jason Becker-style. You can find SGVs on eBay and in pawnshops pretty regularly and while they were underappreciated in their day, a little set-up know-how makes them a bargain well worth seeking out today. 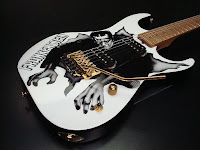 These models were advertised somewhat heavily in the guitar magazines when Stevens was a member of Motley Crue singer Vince Neil’s solo band circa 1993. I remember seeing the truss rod adjustment at the base of the neck, as well as the 2-humbucker, 1 volume, 1 tone control layout and thinking “Dude’s trying to make a Strat-style guitar out of an Ernie Ball Music Man Edward Van Halen.” Funnily enough, by the time the Vince Neil tour rolled around, Stevens was playing… Ernie Ball Music Man Edward Van Halens. There were three versions of Washburn’s Steve Stevens signature guitar: two Chicago custom shop-built models (the SS80 and SS100) and the Korean-made SS40. The SS100 had a white front with a Frankenstein graphic and black back and sides, while the SS80 was solid black. Pickups were a set of slanted Seymour Duncan JBs, and the body wood was poplar. Check out this old-school Washburn advertisement. 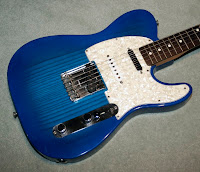 Tommy Emmanuel is well known for his amazing acoustic playing, but those who started following Tommy’s career in recent years might be surprised to know he once had a signature Fender Telecaster. Very similar in design to Fender’s Nashville Telecaster, this Mexico-made axe was made exclusively for the Australian market, and it added a Strat-style middle single coil to the traditional Telecaster layout. It also had a six saddle bridge with old-school saddles (not those big flat ones like you see on Deluxe series Fenders), and a blue finish which recalled, without directly copying, Tommy’s blue Fender Custom Shop Telecaster, which had three black Bartolini single coils and white body binding. Tommy’s main Telecaster squeeze though was a gorgeous 66 Custom, also with Bartolonis. See that one here. (Fender Tommy Emmanuel Telecaster photo from the Fendertalk forums).

Steve Lukather’s current Ernie Ball Music Man signature is so kickass a guitar that it’s easy to forget that in the early-mid 80s he had a signature Ibanez. Part of the Roadstar II series, Luke’s model featured a carved birdseye maple top on a basswood body, a maple neck with ebony fretboard, two Ibanez humbuckers (a Super 58 in the neck and an SL Special – essentially an overwound Super 58 – in the bridge position), 22 frets, subtle cross inlays, coil splitting performed via the volume and tone pots, and the much-maligned Pro Rock’r bridge, which had a locking nut and fine tuners but wasn’t as stable as Ibanez’s later Edge series models.