The mighty Alice Cooper has unveiled his new band, who will accompany him on his “No More Mr Nice Guy” summer tour from May-August 2011.

First-up is guitarist Steve Hunter, an utter, utter legend of rock who has played with Alice extensively and also played on David Lee Roth’s A Little Ain’t Enough with Jason Becker. Tommy Henriksen will replace Keri Kelli on guitar (Alice says it’s time for Keri to go on to his own thang), while Damon Johnson will be continue for an Iron Maiden-like three-axe line-up. Glen Sobel will replace Jimmy DeGrasso (so long Jimmy, you sucked when you were in Megadeth), while bassist Chuck Garric will continue.

Alice said on his website, “Steve’s always been one of my favorite guitarists since the first time I ever heard him play, and I’ve been working with Tommy a lot on the new album. Oh, and yes, a new snake might make the band lineup…you never know. We will miss Jimmy and Kerri, but I know we will be sharing a stage again in the future.”

END_OF_DOCUMENT_TOKEN_TO_BE_REPLACED 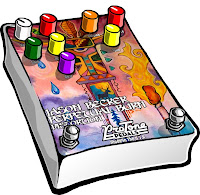 ProTone Pedals is now shipping the Jason Becker Perpetual Burn distortion pedal, which is based on Jason’s favourite Marshall JCM 800 amp, with a little inspiration from the JCM900 he used later in his career for good measure. It also features an additional clean boost channel at Jason’s request, after he said he enjoyed using a higher gain sound later in his career.

At the Shred Academy forum, ProTone’s Dennis Mollan says the design was originally going to include an overdrive channel and an amp emulation channel, but prototype testing sessions with Rusty Cooley led to the decision to use a clean boost channel instead, to be driven by the emulation channel: “The way the boost interacts with the circuit is extremely cool. It adds more bite and tone to the distortion, and obviously adds more volume. The distortion from the emulator really drives the boost into more distortion… this configuration really sounds great. The overdrive going into the distortion is great in the amp world, but here in the pedal realm it really sucked! Was way too noisy. So we scrapped that plan.”

The pedal features original artwork by Jason’s dad, Gary Becker, and is handbuilt in Texas.

In addition to being a solo artist, Jason was guitarist in Cacophony with Marty Friedman, and replaced Steve Vai in David Lee Roth’s band. His performing career was cut short when he was diagnosed with Amyotrophic Lateral Sclerosis, but Jason still composes music. Shrapnel Records will release The Best Of Jason Becker on November 4, including three new songs written by Jason which feature Marty Friedman, Greg Howe, Joe Satriani, Michael Lee Firkins, Steve Vai and Steve Hunter.