Opeth unashamedly alienated some of their fan base with their 2011 album Heritage. While a large portion of their fans were drawn to the Swedesh masters for their progressive death metal leanings, Heritage was primarily inspired by 70s fusion in the style of John McLaughlin’s Mahavishnu Orchestra – and there wasn’t a single death-growl to be heard anywhere. And now, with Pale Communion, Opeth has moved sideways again, a little away from some of the jazzier moments of Heritage and towards more of a 1970s progressive rock feel, while still a million miles removed from death metal. It’s an album which will challenge some fans while thrilling others, but the overall impression from a chat with frontman Mikael Åkerfeldt is that he’s driven solely by his artistry, and this is what he’s feeling right now.  END_OF_DOCUMENT_TOKEN_TO_BE_REPLACED

Guthrie Govan is The Dude from The Big Lebowski. No, not in terms of looks or personality or loyalty to a particular rug, but in the sense that sometimes there’s a man, well, he’s the man for his time and place. He fits right in there. And that’s Guthrie Govan. His style brings together incredible technique and tone but most importantly it’s packed with personality and vision. To hear Guthrie play is to hear someone who’s playing with music, rather than playing at music, whether in his trio The Aristocrats with Bryan Beller and Marco Minnemann, or in Steven Wilson’s solo band, or playing his own material. With Guthrie heading to Australia soon for a series of masterclasses for Thump Music as well as an appearance at the Adelaide International Guitar Festival, it seemed like high time to talk shop with the dude.  END_OF_DOCUMENT_TOKEN_TO_BE_REPLACED

Regarded as a visionary and one of the driving forces behind the modern progressive rock/metal movement, Steven Wilson, the man who created Porcupine Tree, is an eclectic and prolific artist who is able to tap into the pure emotional heart of his music as well as the intellectual side without compromising either. Witnessing a Steven Wilson live performance is to be engulfed by mind-bending visuals and a bombastic aural surroundscape. His latest album, The Raven That Refused To Sing (And Other Stories) is perfectly built for the live stage. Actually, scratch that: the album is so ambitious and enveloping that it requires a special stage setup in order to pull it off in a way that’s true to Wilson’s vision. So when Wilson tours Australia this month, he’s brought with him a quadraphonic PA system as well as multimedia visuals for a truly immersive experience. Accompanying Wilson is a collective of world class calibre musicians:  Guthrie Govan on lead guitar, Adam Holzman on keys, Theo Travis on flute and sax, Nick Beggs on bass guitar and Chapman Stick, and Frank Zappa drummer Chad Wackerman – drums. I caught up with Wilson on the eve of the tour to talk surround-sound, the guitar, the creative process and the shifting musical landscape. END_OF_DOCUMENT_TOKEN_TO_BE_REPLACED

Man, it’s a great time to be a music fan in Australia right now. In addition to the Yngwie Malmsteen clinic tour and Gus G’s Firewind tour, we’re about to be treated to a three-show mini-tour by Steven Wilson and band, including Guthrie Govan and Chad Wackerman. Wilson will be touring in support of his most recent album, The Raven That Refused To Sing (And Other Stories), as well as his other solo albums, Insurgentes and Grace For Drowning. More info – including VIP Meet & Greet packages – below or visit Metropolis Touring’s website. Tickets are on sale 9am Tuesday August 13. END_OF_DOCUMENT_TOKEN_TO_BE_REPLACED

Porcupine Tree and Opeth are both bands with distinctive sounds – Pink Floydian prog rock on one side, and sprawling progressive death metal on the other. So you could be forgiven for expecting a collaboration between each band’s masterminds (Porcupine Tree’s Steven Wilson, Opeth’s Mikael Åkerfeldt) to be a progressive death metal epic full of odd time signatures, crushing riffs, growled vocals and ambient guitar solos. But for hints as to what you can expect from Storm Corrosion, you need to look into each artist’s most recent works. Wilson’s Grace For Drowning leans more towards lush soundscapes and psychedelic ambience, while Opeth’s Heritage could have come straight out of the seventies, with its vintage progressive rock (rather than progressive metal) elements that share more in common with King Crimson and Yes than Dream Theater and Symphony X.

And it’s here, in the middle of these two releases, that we find Storm Corrosion. The album’s six tracks – the term ‘song’ doesn’t quite cover it in this case – typically end up in a very different place to where they start, with structures that seem dictated by the previous note rather than any adherence to accepted song structures. And that’s a big reason why it’s such an engaging experience.

END_OF_DOCUMENT_TOKEN_TO_BE_REPLACED

Aside from the new Van Halen, it’s got to be the most highly anticipated album of the year in my little corner of the world: Storm Corrosion, the collaboration between Steven Wilson of Porcupine Tree and Mikael Åkerfeldt of Opeth. And they’ve just signed to Roadrunner Records. Loved Wilson’s Grace For Drowning and the fusionesque Heritage by Opeth? Wilson says this album completes that trilogy. Can’t wait to hear it!

Roadrunner Records is pleased to announce the signing of Storm Corrosion.

Storm Corrosion is the long-discussed and highly anticipated collaboration between two of the modern progressive rock scene’s most innovative and multi-talented artists: Porcupine Tree’s Steven Wilson and Mikael Åkerfeldt of Opeth. The pair will release Storm Corrosion on April 20.

Wilson and Åkerfeldt have been friends since the late ’90s, when Wilson co-produced Opeth’s reveredBlackwater Park album. Over the years, they’d often spoken of working on a project together, but it wasn’t until recently that they managed to make something happen, when Mikael flew over to visit Steven in the UK and they ended up in Wilson’s home studio throwing ideas around. That visit was the nascence of a whole self-titled album, written and produced by the pair and mixed by Wilson.

END_OF_DOCUMENT_TOKEN_TO_BE_REPLACED 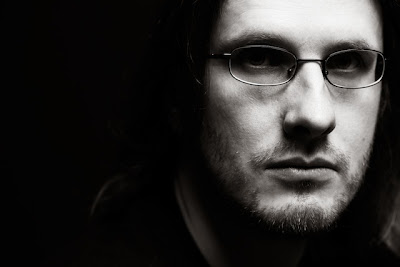 ’ is a 55-minute song in 14 parts which occupies an entire disc of the 2-CD album of the same name. Rather than cram as many notes into the recording as possible like many other progressive epics it’s a ponderous, spacious recording full of atmosphere and pensive interludes – though it still contains more than enough crushing riffage to satisfy fans of the edgier side of prog. Thematically, the album examines one topic from several angles and perspectives. I caught up with band founder Steven Wilson to discuss the intricacies of writing such a dense piece, and the inspiration that drove it.

So how does one write what is, in essence, a 55-minute song? “Writing a 55-minute song is very much like writing a novel, which you would approach differently to writing a short story or a collection of single songs,” Wilson says. “It’s a very distinct way of working. When you’re writing a novel you’re really working in a linear way, and the secret is allowing the idea to develop in that linear way, rather than coming up with each detail in a way that’s very fragmented and working then it in to create the finished product. The Incident was very much written from start to finish.” Wilson notes that the band’s current live performances include a full rendition of The Incident, complete with visuals by three filmmakers, each working in a different medium.

In a specific sense, Wilson has previously said the impetus for ‘The Incident’ was passing a fatal car accident and hearing it referred to by attending police simply as ‘an incident.’ But the inspiration grew from there and the theme became much deeper. “I think I was riffing, in a sense on that whole concept of how the media distorts a story,” Wilson says. “And that got me thinking about events from my own life and things I’ve seen. For instance, the very strange thing about 9-11 is that it was very public, in that you could actually watch it happen on TV. That same day there was an earthquake which killed thousands of people, but you didn’t hear too much about it. Meanwhile September 11 was literally unfolding before your eyes on TV. It was very cinematic, in a way, and I think that’s something that speaks to the way that people relate to television. There’s something very sick and twisted about that. You saw a similar thing earlier this year when Michael Jackson died. It became a real-time event, and the whole world was mourning this pop star – who hadn’t made a good album in 15 years!”

I suggest to Wilson that a similar thing happens today with real-time news on TV and online. For instance, it used to be that you’d read the news of Megadeth, Metallica, Slayer and Anthrax appearing together at the Sonicsphere festival in a magazine three months after it was announced. These days, you see it on a music news site the day after you saw it on Twitter and think, ‘Jeez, that’s old news!’ Wilson agrees. “A similar thing has happened with the release date of albums. It used to be that the first day you could hear an album was the release date. You’d line up at the store and it was a big event to get the album at midnight on the day it went on sale, or whatever. Now everyone’s already got it online well in advance of the release date, and the actual release date has just become a formality. I guess I feel a bit nostalgic for actually waiting for a release date, lining up and buying the new Kate Bush album or something like that.”

I suggest to Wilson that we wind down from such heady matters with a quick rundown of his live gear: “I use Paul Reed Smith

and just a lot of different pedals. I don’t like things to be too complicated with my gear on stage, because the music is complicated enough. I can’t be worrying about this piece of gear or that piece of gear.”

The Incident is out now on Roadrunner.
Photo:  Diana Nitschke

Can’t get enough prog? Click here for my December 2009 interview with John Petrucci from Dream Theater.